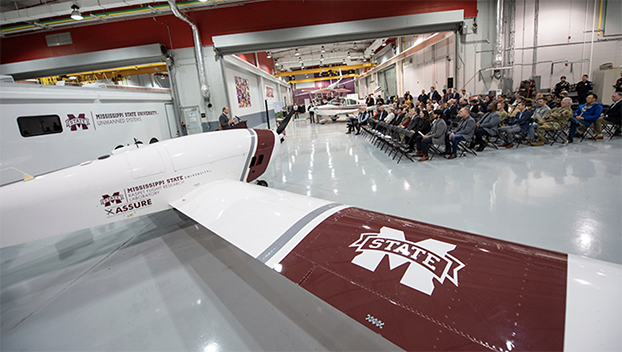 The future of aviation is in Mississippi, officials from Mississippi State University said when they unveiled the largest uncrewed aircraft at any US academic institution — a plan capable of flying up to 24 hours without refueling and able to carry a 600 pound payload.

On Dec. 1, MSU leaders officially unveiled the Teros, the newest addition to Raspet Flight Research Lab’s fleet of uncrewed aircraft systems, or UAS. At 1,800 pounds and with a 40-foot wingspan, it is the largest UAS at any U.S. academic institution. The new aircraft will boost MSU’s efforts to assist government partners in safely integrating UAS into the national airspace and the university’s exploration of UAS capabilities to benefit areas such as agriculture, environmental sciences, emergency response and infrastructure monitoring.

“Our vision here at Raspet is to bring researchers, faculty and students together to propel the technology that will usher in the future of aviation,” said Raspet Flight Research Lab Director Tom Brooks. “As we officially unveil the Teros, together we celebrate the advancements achieved through our research and imagine the future as we demonstrate the power inherent in large UAS technology to change lives and make aviation safer and more efficient.”

Built by Navmar Applied Sciences Corporation, Teros is capable of flying for up to 24 hours without refueling and can be equipped with a 4G LTE cellular system for use in disaster response or other emergency scenarios. It is expected to be the first UAS of its kind to become type certified by the Federal Aviation Administration, meaning it is designed for complete future integration into the national airspace system. Receiving type certification would enable it to immediately begin operating alongside manned aircraft when regulations permit.

During Thursday’s event, MSU President Mark E. Keenum noted some of the key milestones in MSU’s aviation history, including working with Honda Corporation to develop the world’s first all-composite business jet. MSU’s first exploration with remotely piloted aircraft began nearly two decades ago at Raspet. In the late 2000s, MSU’s Northern Gulf Institute and Geosystems Research Institute developed innovative UAS programs focused on precision agriculture and studying the environment that continue to this day. In 2015, the MSU-led Alliance for System Safety of UAS through Research Excellence, or ASSURE, was selected as the FAA’s Center of Excellence for UAS. Since then, MSU has led major UAS research, testing and evaluation initiatives on behalf of the U.S. Department of Homeland Security and Department of Defense and continues to work closely with the National Oceanic and Atmospheric Administration in UAS research. In 2020, Raspet was designated as the FAA’s UAS Safety Research Facility.

“Aerospace research has really become part of our DNA, and we as a university are a leader not only in this state, but nationally and in many respects globally based on what we have been able to achieve,” Keenum said. “We are leading the way in this technology that will impact our future. This creates wonderful opportunities for our students to learn about this technology. I believe we are beginning another chapter in Raspet and MSU’s remarkable work in aviation research and development.”

MSU Vice President for Research and Economic Development Julie Jordan highlighted MSU’s many UAS-related collaborations with local, statewide and national partners that continue to generate impactful results for stakeholders and the broader aviation community. She also noted the potential of Raspet’s activity to inspire the next generation of the state and country’s aviation workforce, with more than 800 students from Partnership Middle School at MSU touring the lab in October.

“We’re really proud to have a team here at MSU that is blazing trails for uncrewed aircraft in the Unites States,” Jordan said. “This vehicle is a glimpse of the future of UAS technology, and it’s going to help the United States continue to lead in this sector globally. Today, this vehicle also solidifies Mississippi State and Raspet as the national leader in this space.”