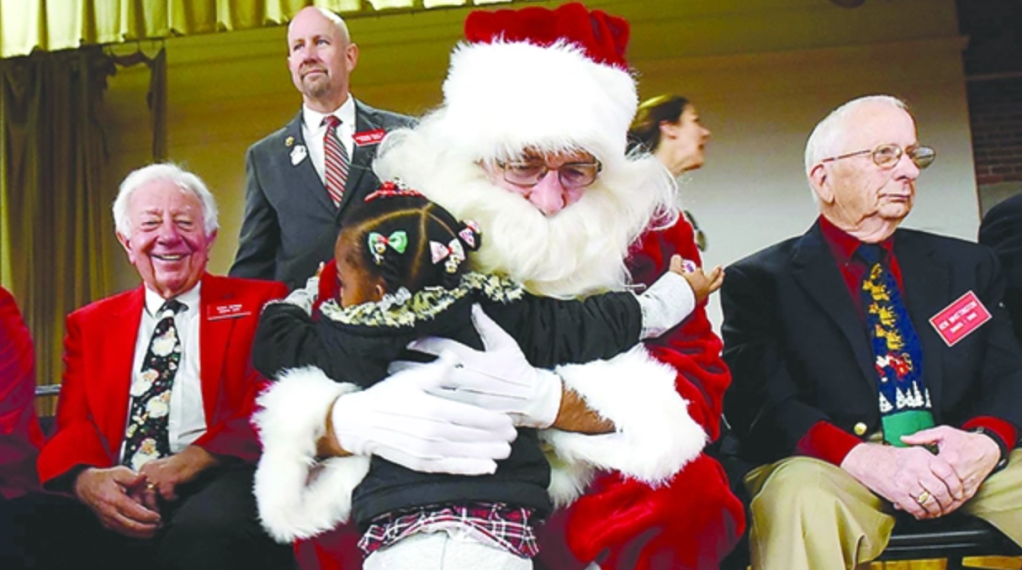 A proud fraternity of Natchez men gathered recently to dine together and reminisce about the time they spent as the city’s Santa Claus.

In 1928, a small group of businessmen met in the office of then-Chancery Clerk Walter Abbott to discuss Christmas needs for the children of Natchez.

Every year since, the Natchez Santa Claus committee, which began as support to the Poor Children’s Christmas Tree Fund started by Capt. James Lambert and The Natchez Democrat in 1903, has worked to make certain Natchez children do not go without a visit from Santa at Christmas time.

Nearly 100 years later, the fund is now known as the Natchez Children’s Christmas Tree Fund. And, as the tradition goes, the committee helps ensure Santa not only visits to bring gifts to the children of Natchez, he also parades through town early on Christmas Eve spreading cheer and holiday fun.

“As a kid, I followed them around when they were throwing candy,” said former Natchez Mayor Tony Byrne, who served as Santa in 1989.

“When I got out of college and started to work, my cousin, Billy Byrne, invited me to go along,” Byrne said. “Since that time, which I believe was in 1960, I have not missed one, and I don’t intend to.”

About 300 members make up the committee that works for months each year, making certain Natchez children have a good Christmas.

Johnny Byrne was the Millennium Santa, serving in the year 2000. He has also led the Santa Claus committee for 18 years.

“It was an honor to be Santa Claus,” he said. “I was the third generation of Santa in my family. My grandfather was Santa, my uncle was Santa and I was. I enjoyed every minute of it.

“It’s really, really good for the kids. It’s a way that a lot of children who would not otherwise will have a good Christmas. The untold hours the committee and the Children’s Christmas Fund put into this, the entire community contributes money… It is something so unique to Natchez,” Johnny Byrne said

Those involved in the Santa Claus parade meet in the early morning and begin their route through the city, escorted by Natchez Police officers and Adams County Sheriff’s deputies and throw candy to eagerly awaiting children.

At about 11 a.m., the parade heads to Braden School, where Santa greets a packed gymnasium of children and their families and are presented toys by Santa. Catholic Charities screens and provides the list of needy children.

“Thank goodness to the police and the sheriff and the mayor and aldermen for allowing us to do it,” Johnny Byrne said. “Most things like this don’t survive. They end up falling by the wayside. But the Santa Claus Committee hasn’t. We have people from out of town who are guests and come in for the parade. People are amazed by it. We have a lot of people from out of town who continue to pay dues each year to the Santa Claus committee, but will probably never be in Natchez again.”

The Santas never lose sight of their purpose and the tradition the committee has built in Natchez.

“We have generations and generations of kids who have grown up knowing Santa was going to ride by their house on Christmas Eve morning. They hear all the sirens and jump out of bed and run out to the sidewalk and wave to Santa and gather the candy thrown in the parade. It’s something so unique to this town.”

Also in the unique spirit of Natchez, Tony Byrne chuckled remembering the number of Jewish businessmen who have served as Santa.

“Willie Stein was Jewish. Max Ullman was Jewish. Just look down the list at the Jewish names. But it was for the children,” he said.

The Santas have a lot of fun in the process.

“We have had some outstanding parties,” Byrne said. “Pat Biglane put on one heck of a party at the convention center. The party is completely funded by Santa and his wife, in most cases. It is by invitation only. Of course, the entire Santa Claus committee is invited, but it’s all on Santa’s dime.”

Byrne said his memory of the Santa Claus party he threw in 1989 at the Prentiss Club is one of bitter cold.

“When I got in the convertible early that morning, it was 5 degrees,” he said. “My party was so doggone cold! Cappy Stahlman came to the rescue with some great big heaters.”

When Christmas Eve falls on a Sunday, the Santa Claus parade is held on a Saturday.

“Johnny Byrne’s party fell on a Saturday, and, unlike most years, we didn’t have to go home and put together toys. We kept having more and more drinks and eating more and more food … Johnny had to keep paying the band to continue to play,” Byrne said.

While the parties are fun, giving back to those in need is the priority.

“Yes, we’ve had a good time. That’s what Natchez is known for, but we do an awful lot of good,” Tony Byrne said.