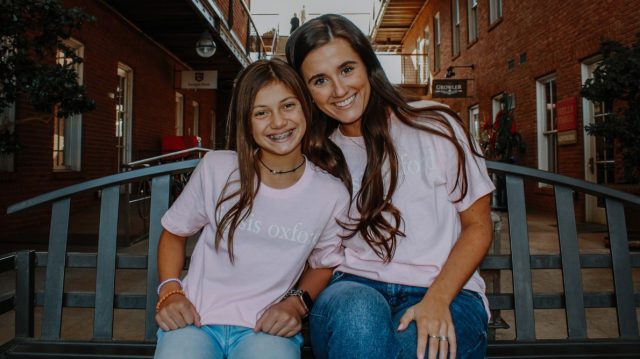 UM junior Georgia Zeleskey (right) spends time with Mary Rhodes Manley, who Zeleskey babysat for the first two years of college. Zeleskey’s relationship as a mentor for Manley is what inspired her to found Big Sis Oxford, a program which pairs college students with young women in the community for mentorship.

A young women’s mentorship program created by University of Mississippi junior Georgia Zeleskey aims to give a “big sister” to young girls growing up in college towns. After explosive growth in just two months in Oxford, she hopes to spread that mentorship across the Southeastern Conference.

The goal of the program is for these young girls “to have a well-rounded, loving and compassionate college-aged big sister to learn from, grow with and become close friends with,” Zeleskey said.

Using that motivation, the marketing and real estate major from Kingwood, Texas, created the Big Sis Oxford, a young woman’s mentorship program that has grown to more than 100 participants in just two short months.

“The mission is to empower, encourage and mentor young girls in the community through Bible study and consistent motivation from college girls,” she said. The program pairs girls in grades 4 through 11 with a “big sister” student on campus who can guide them in matters of faith and answer questions about life.

“We know a lot happens in that time of your life,” she said. “Comparing yourself to others, deciding what is good and what’s cool.

“Having that older sister who has seen a few things and can help answer questions and give advice, knowing they’ll love and accept you no matter what – that can help these girls.”

Between August, when Zeleskey began interviewing big sisters, and early November, the group grew to more than 100 participants, including big and little sisters. The groups meet once a month on campus for an hour of Bible study and of one-on-one mentorship.

“These young girls look up to, for better or for worse, college-age girls and desire so much to be in connection with those girls,” Manley said. “Georgia has created a program that is so well-rounded. They present the best side of what a female co-ed could be.

“For these young impressionable girls, it’s so important that they not only see that, but develop a relationship with these girls.”

The program is influencing the big sisters as much as the little ones, said Maggie Collum, a junior speech pathology major and vice president of administration for Big Sis Oxford. Collum has two little sisters this semester, and she said they’ve opened up to her in ways she wouldn’t have expected.

“They have opened my eyes in so many ways,” Collum said. “They’ve pushed me and encouraged me to be the best version of myself. They’ve motivated me to love like Jesus.

“That’s the main goal on my part, to show them that love.”

During the first meeting, Collum said her first little sister told her about her boyfriend, friends and school – all the drama of being in seventh grade.

“It hit home for me because I’m a believer that all young girls need some kind of mentor,” Collum said. “I have a younger sister, and I always made it a priority to make myself someone she could look up to and trust. I think it’s important that these young girls have that person, too.”

After seeing explosive growth in its first months, Zeleskey said she plans to expand the program to Mississippi State University in the spring, and then on to other SEC schools. Talks are underway to get the program started at MSU, she said.

“If this is this popular already, it will be popular in other places,” she said. “A lot of girls know people who went to Mississippi State, and I thought, the next place to go is Starkville.”

Big sisters can answer questions that a mom can’t, Manley said. They can talk about issues that would be difficult to discuss with a parent. Zeleskey had already begun filling that role for Mary Rhodes before Big Sis Oxford, and now she’s sharing that experience with other young women.

“It takes a lot of courage to ask peers to uphold those expectations,” Manley said, referring to the dress code and codes of conduct in place for big sisters.

“I’m just so thrilled that there are so many girls who are gung-ho for it, who are willing and committed to being a part of this program. I’m also just incredibly grateful to her, and I’m proud of her.”