Mississippi homeowner: Tornado lifted her house with eight people inside 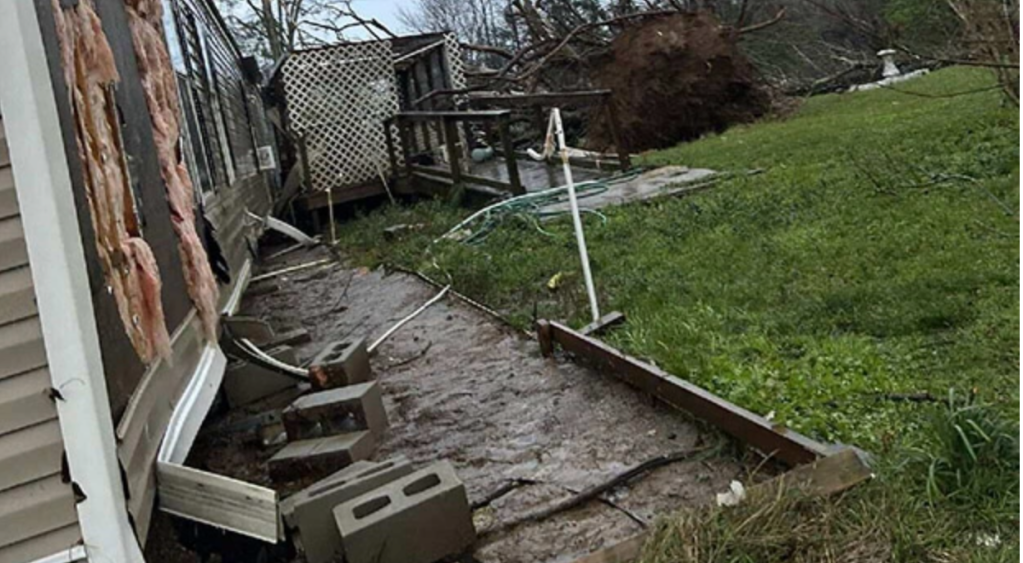 The owner of this mobile home on Nations Road in Cranfield described a harrowing evening when what she thinks was a tornado picked up and displaced her home. (submitted)

A small neighborhood on Nations Road in the Cranfield community looks like a scene from the opening act of Wizard of Oz after an overnight storm, possibly a tornado, caused major damage.

Shirley Dawson lives in a trailer at 24A Nations Road off of Cranfield Road in the area under a 2 a.m. Tornado Warning on Wednesday. She described a likely tornado that lifted her house with eight people inside.

“The tornado hit my trailer and near about turned it over with us in it,” she said. “Two trees fell on top of my vehicles so now I don’t have a vehicle. The metal frame of the trailer came through the kitchen floor.”

She held onto her bed and couldn’t move and felt as if her head was going to hit the wall, she said. A large dresser in her room fell over and pots and pans in the kitchen cabinets spilled out.

“Everything was on the floor,” she said. “It picked up the house and set it back down, but not in the same spot.”

The back porch blocked the back door of the trailer where they couldn’t get out. When help came they had to break through a glass screen door that couldn’t be opened to climb out, she said.

Through all of that, “We all came out with no scratches,” she said. “I hope no one ever has to experience anything like this.”

They went to her son’s house in Gilbert for the night and Dawson returned Wednesday morning to see if there was anything left she could save. Photos show the siding of the house ripped off and a shed caved in on top of her cars.

“I’m trying to get me some work clothes out of here if I can,” she said. “I can’t get to anything in my closet. … The next-door neighbor got a bit of roof damage and the house before me had his shed messed up. It looks like it hit them a little and hit me from both sides.”

Tasha Felter said her 15-year-old son happened to be staying over at the house with a friend and called her frantically after 3 a.m. to inform her that a tornado had hit them.

“He said it felt like it picked the trailer up and spun it a little bit and basically uprooted the tree in the front yard,” Felter said.

Felter, who lives in Kingston, said she was standing outside and witnessed what she thought could be a tornado about 20 minutes before her son called.

She said the event lasted for about 30 seconds. Hail, about quarter size, fell and stopped and started again.

“Then the wind almost died off and then suddenly the biggest gust of wind came through that I’ve ever experienced,” she said. “It scared me half to death.”