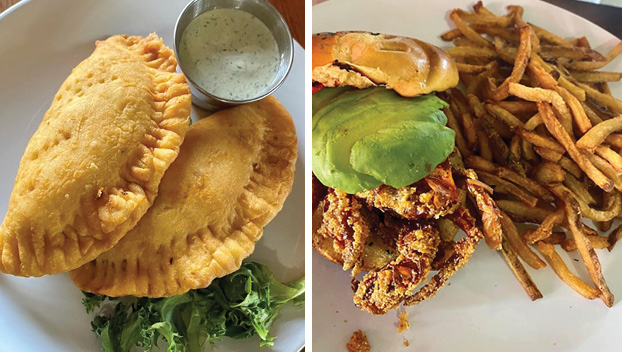 At Coconuts Bar & Grill restaurant, a new restaurant with a panoramic view of Natchez and the Mississippi River, Allen introduces a fusion of Southern Caribbean cuisine, also called SOCA cuisine.

The restaurant is located 106 Carter St. along the Mississippi River in Vidalia.

There are many similarities between southern and Caribbean cuisine and a lot of the same ingredients are used in both, he said.

“I wanted to bring something island but playful,” he said. “That is how we came up with the name Coconuts. It’s something more regional than just the Caribbean.”

Locals of the Miss-Lou had high expectations for the new restaurant long before it officially opened Thanksgiving day, said Allen, who owns and operates the establishment with his wife, Sarah Sookraj.

Once the home of the Sandbar Restaurant, some want the restaurant to do well simply because of the good reputation the location already has for those traversing the Vidalia Riverfront. Others are already fans of Allen’s food from his prior work as the head chef at The Little Easy and The Kitchen in Natchez.

As a native of the Virgin Islands, Allen said Coconuts is the first restaurant he has owned in the United States but he has been involved in family restaurants in the islands since he was 17 — professionally since 19 years old, he said.

In the states, he worked at many resort restaurants—Ritz-Carlton, Westin, Marriott—and eventually landed in Jackson working with Mississippi celebrity chef Nick Wallace.

Just before the COVID-19 pandemic, Wallace asked Allen to join him in Natchez to help fulfill Tate Taylor and John Norris’ vision of a Church Hill Variety restaurant chain, which includes Smoot’s Grocery and The Little Easy.

After wowing many taste buds at restaurants on one side of the river, Allen and Sookraj decided to start up a new business on the other.

“At first we thought the Miss-Lou just meant Mississippi and Louisiana — the entire state — but since coming here several people told us that it actually just means Natchez and Vidalia,” Sookraj said. “Even though they’re right there, they’re still separated and you can definitely tell there is a separation even though the two cities enhance each other in a lot of ways that people don’t realize. … We wanted to invest in this community and just fell in love with the area. … Just like Natchez was welcoming when we first came to open The Little Easy and Smoot’s everyone here was so welcoming and sweet.”

Allen said a favorite dish so far among restaurant patrons is the jambalaya pasta — a combination of salty, savory and a touch of sweet flavor. For dessert, Coconuts has rum cake, key lime pie and pecan pie stuffed cheesecake — which is exactly what it sounds like.

The semi-Caribbean dishes use ingredients from Natchez and Vidalia, such as rum from 1827 Spirits to go in the rum cake dessert.

The restaurant is open in full swing, with catering, take out and event space available.

While running the new business, Allen also wears another cap as the professor of Restaurant University, a program launched last year through a partnership between Allen and Copiah Lincoln Community College to build a culinary and hospitality workforce here, he said.

The classes also include hands-on labs, which may bring students into the restaurant to be graded on their cooking and serving skills.

“We’re waiting on the new high school to be built and then one of the existing schools will become a technical, vocational school with an advanced program and I will be an instructor there,” Allen said, adding his classes are for Advanced Placement students in high school as well as college students and anyone else.