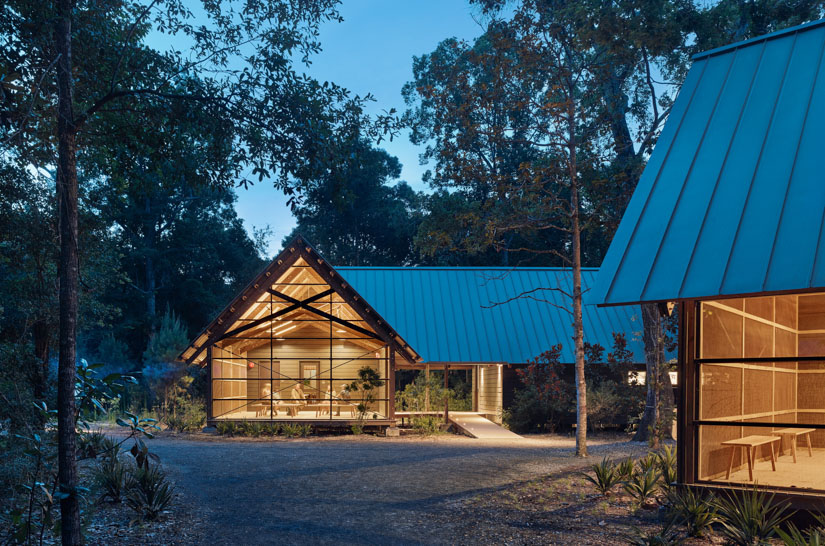 University of Southern Mississippi (USM) officials already knew that they had a design masterpiece in hand when the Marine Education Center (MEC) opened its doors in April 2018. Since that time, accolades have continued to pour in for the unique facility.

Last week, the MEC captured first place in the inaugural season of “America ByDesign: Architecture,” a magazine-style television series produced by CBS that shines a spotlight on American architectural innovation, ingenuity, and design excellence to a broad audience. The MEC emerged from 10 finalists to secure the coveted title by a unanimous vote from the judges.

MEC Director Dr. Jessica Kastler watched the entire series that included six episodes and a multitude of design entries. She felt confident that the center would advance to the exciting season finale.
“As an occupant of the Marine Education Center for nearly five years, I am used to the MEC, and it’s hard to imagine someone else’s experience when they first see it,” said Kastler. “Still, I was very impressed by the MEC’s video and was not surprised we advanced to the finals. Imagining the conversations that must have gone into the expert panel’s decision to select the series winner, I saw the MEC with new eyes again. It was a pleasure to watch that final episode, and this recognition is quite an honor.”

Situated on approximately 100 acres in Ocean Springs, the facility serves as the educational and outreach arm of USM’s Gulf Coast Research Laboratory (GCRL), providing an immersion experience for participants in a unique, coastal setting.

The MEC had been working from temporary buildings at GCRL after Hurricane Katrina destroyed the previous facility at Point Cadet in 2005. The University contracted with Lake|Flato Architects, San Antonio, Texas for design of the current center that represents the crown jewel of USM’s marine education and research efforts.

“It was an absolute honor to work with the University of Southern Mississippi to help realize their vision of placing the coastal habitats of Mississippi at the forefront of the design process in the creation on these buildings for the Marine Education Center,” said Matt Wallace, partner at Lake|Flato, who contributed to the design of the facility.

The center exemplifies sustainable coastal building techniques in harmony with the marine environment. The education facility includes outdoor classrooms, laboratories, administration offices, assembly spaces, exhibition areas, and a pedestrian suspension bridge where researchers have an unparalleled opportunity to learn about the ecologically critical bayou and tidal wetlands of Mississippi.

GCRL Interim Director Dr. Kelly M. Darnell notes that the innovative campus and world-class educators of the Marine Education Center make it an ideal location for students of all ages to learn about the marine environment.

“The synergistic relationship between the MEC and the research efforts at the Gulf Coast Research Laboratory enhances our ability to be a leader in marine research and education in the Gulf of Mexico and provide scientific support to the state as Mississippi’s designated marine laboratory,” said Darnell, who also serves as Director of the Mississippi Based RESTORE Act Center of Excellence.

In May of this year, the American Institute of Architects (AIA) recognized the MEC design team with one of its highly sought-after Honor Awards. Prior to that in 2020, AIA awarded the MEC one of its Committee On The Environment Top 10 awards. The MEC is the only building in Mississippi to ever receive this designation, which awards 10 outstanding projects each year based on design excellence with environmental performance. This award is designated as one of the industry’s best-known programs for recognition of sustainable design excellence.

Kastler hopes the continued recognition will encourage people to visit the MEC again, or perhaps for the first time.

“When they do visit or participate in an educational program, the recognition reinforces the concepts we teach about environmental sustainability and hazard resilience,” said Kastler. “It also brings attention to USM’s linked, multidisciplinary efforts across the coast to understand the ocean and coasts, improve coastal resilience and support the blue economy.”