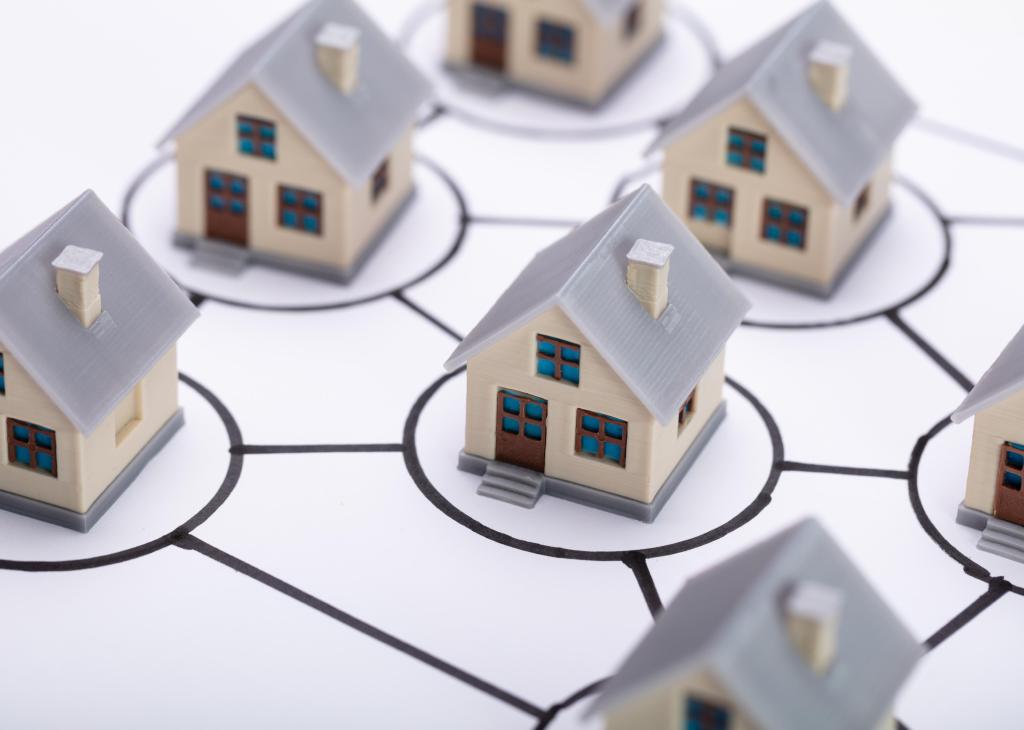 In the low-interest rate era that followed the 2008 housing crisis, real estate developers rushed to build housing stock to meet rising demand. Federal data suggests that nonprofit associations have been set up at an increasing rate to govern these new developments.

We’re, of course, talking about homeowner associations—the hyperlocal, quasi-governmental organizations 73 million American homeowners answer to when they want to renovate, repaint or even scale back on landscaping.

Portland Real Estate analyzed data from the Census Bureau to explore single-family homebuilding activity, examining the volume and share of homes built within HOAs nationally and regionally. The analysis only includes homes that were built for sale, excluding those built for rent.

The general structures of these associations have barely strayed since their popularization via a 1985 law passed in California. The historic roots of HOAs grew from the privatization of shared amenities in the wake of non-white integration into previously white-dominated spaces across the country.

Today, HOAs are typically nonprofit organizations run by an elected board of residents that holds community meetings and collects dues to maintain shared amenities like landscaping, pools, parking, and walkways. Development companies often write the initial rules and then transition control to an elected board of homeowners after completing most of the homes in a development.

What has evolved since the 1980s is a booming industry built around serving the management needs of these organizations.

While HOAs are meant to serve the collective benefit and interests of residents and their properties, some may fall into gray areas. A recent investigation into Colorado HOAs and their disappearing dues revealed that the companies tapped to manage these organizations are bestowed with the power to collect and manage large sums of money that belong to the community—and they aren’t always accountable to the homeowners they purport to serve.

As more developers build HOAs into new housing communities, homebuyers are increasingly finding themselves tied to these associations. Read on to find where HOAs are most common in the U.S.—and why. 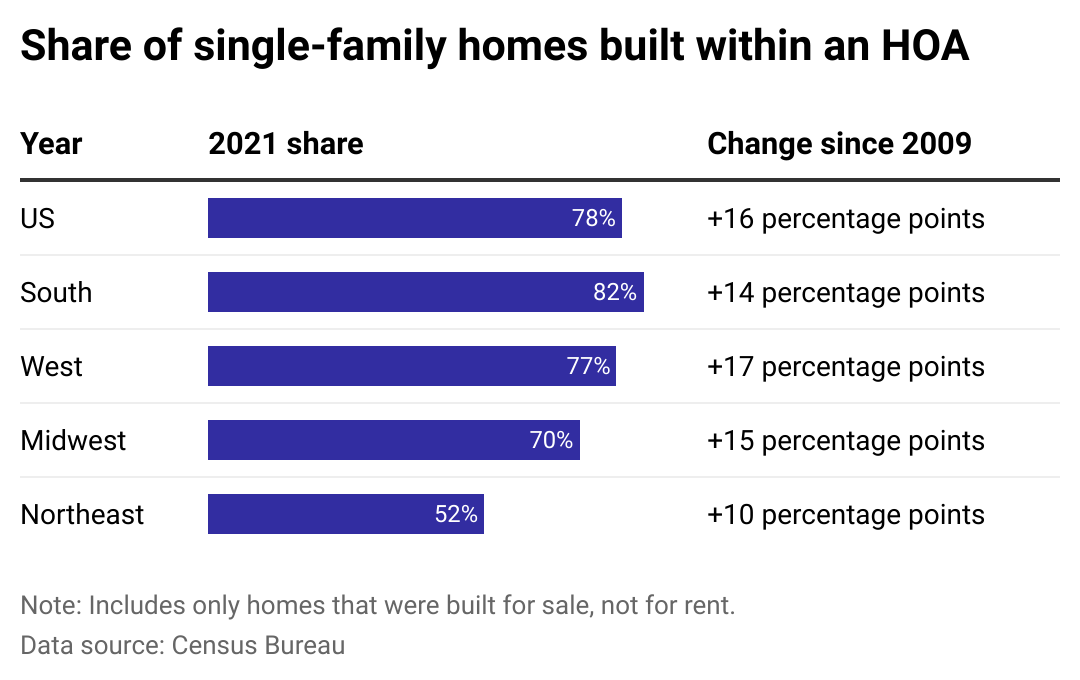 Most new, single-family homes in the US are part of HOAs, and the share is growing

Associations that emerged to support HOAs claim Americans want to be a part of these organizations and have conducted polls suggesting homeowners are largely satisfied once they join HOAs with how their associations operate.

Conversely, developers say they appreciate HOAs because they allow for quality controls that safeguard a company’s legacy in the communities it built long after it’s moved on to construct the next. 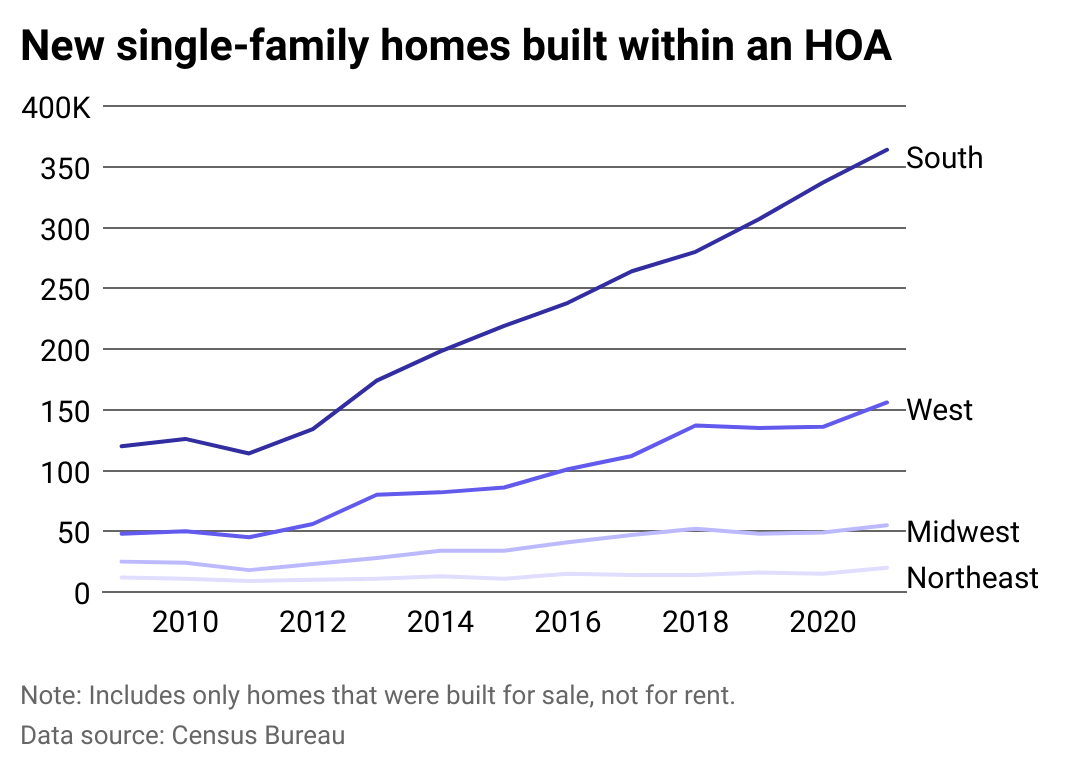 The number of new homes built within HOAs has nearly tripled since 2009, to nearly 600,000 in 2021. The South and West continue to see the largest volume of new homes within HOAs, comprising nearly 90% of HOA-involved construction. In the Midwest, only about 55,000 homes were built within HOAs, and the Northeast trails behind at about 20,000. The prevalence of HOAs in the South and West have resulted in some state lawmakers introducing bills to allow HOAs to be regulated.

In Texas, for example, the legislature passed laws last year that will, among many other things, create a central database of HOAs in the state for the first time and cap fees that can be charged to potential homebuyers when they request info about the financial standing of a specific HOA. These bills were pushed and supported by a contingent of homeowners and real estate agents and authored by a bipartisan duo of state legislators. Laws regulating these organizations, however, are few and far between. 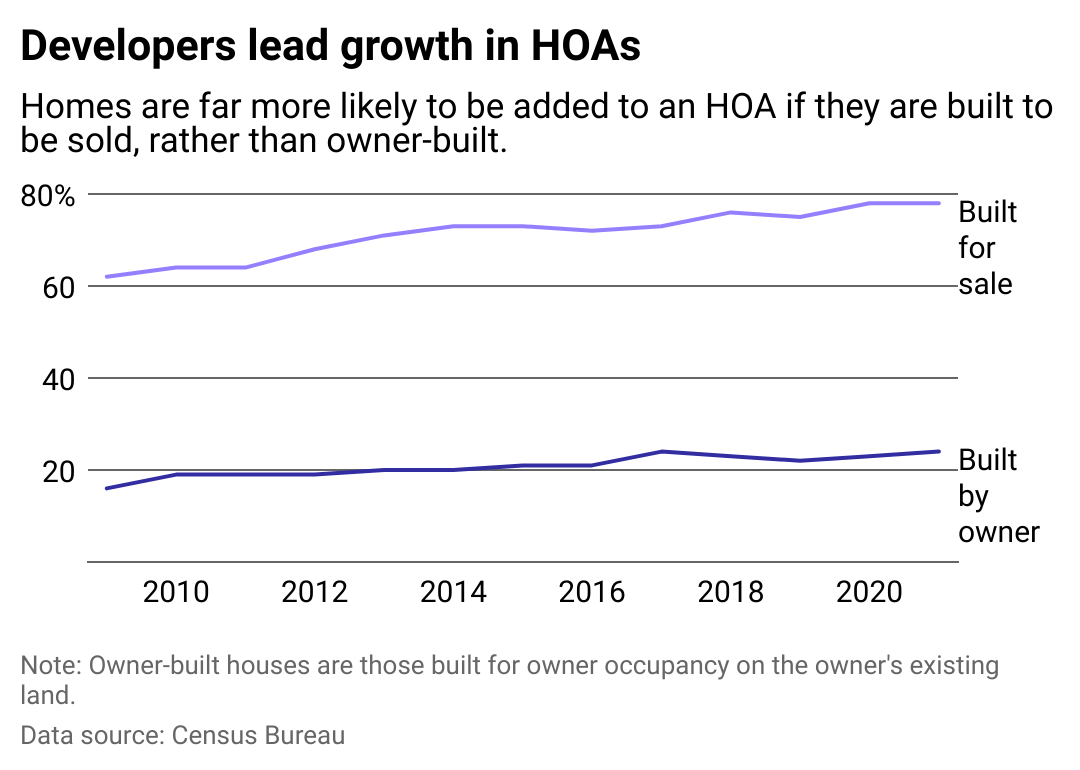 About 16% more homes built for sale by developers in 2021 were part of an HOA compared with 2009. It’s a proportion that’s ticked upwards nearly twice as fast as it has for homes built by the owner.

Historical data reveals that whether a newly built home is governed by an HOA greatly depends on which stakeholders are involved at the time of home construction. Only about 1 in 5 people who build their own homes choose to be a part of an HOA by locating their home in a private community or initiating a new association.

But when a developer is planning a community with the potential for hundreds of homes, they are incentivized to maintain a high standard of care across each and every property seeing as they eventually aim to sell each home at a profit. And fluctuating housing demand means it could take years or decades to completely fill out a development.