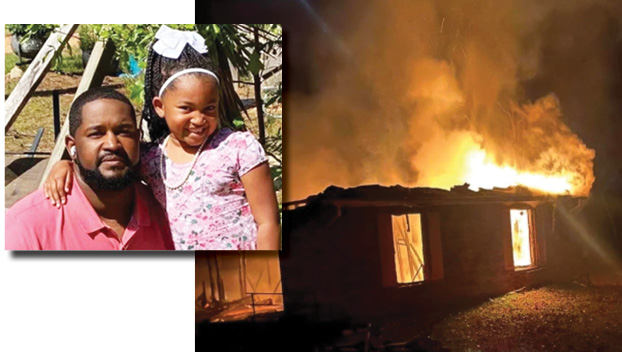 In the aftermath of a fire that destroyed his home and its contents, a Loyd Star man says he knows he is “still blessed” and that God is taking care of him and his daughter.

“Thank God that me and my baby were not home,” said Kenneth “Junebug” Johnson, who made his home in Loyd Star with his daughter, Kennedi. “We may have lost it all, but I promised my little girl I will bust my butt to get it all back. Christmas stuff gone. That list she made Daddy. I made sure I got it all — to be gone like that. But we are blessed to still be here.”

A fire that started Saturday night as the Johnsons were away from home destroyed the dwelling, their belongings and Christmas gifts. Family friend Stephanie McGill started a GoFundMe account to help them, with a goal of $20,000.

“To know Kenneth is to love him. He’s literally one of the most genuine people I have ever met and have the privilege of calling him my friend,” McGill said on the fundraising page. “He works so hard to provide a good life for himself and Kennedi.”

Johnson said firefighters think the blaze started in his man cave and spread.

“The good Lord has blessed me. My little girl was gone to her mom’s for the weekend,” Johnson said. “I had got all her Christmas gifts and had them under the tree. Everything she wanted. I ain’t never had a whole lot of nothing, but I’ve never had nothing. It’s kind of rough, but I’m coming on through with it.”

He said his daughter is with family, and he’s staying in a Brookhaven motel temporarily. A buddy has promised him a camper to use, but he won’t be able to get it until after Christmas.

People have offered to bring him food to stock a refrigerator and freezer, but he has no place to store it yet. His friends in the racing circuit he is part of have reached out and offered a lot of help and encouragement.

He has Cash App, so anyone comfortable with donating directly to him may do so that way, by sending funds to $junebug198620. Donations of any kind can be dropped off at James Case Oil Inc./Case’s Grocery during regular business hours. New or gently used, clean clothes can also be dropped off at the office of The Daily Leader, also during regular business hours.

“That would be a great deal of help,” Johnson said Monday. “Right now this is my first full day back at work. I’m just trying to get things figured out.”

“I’m really just starting to process it all,” Johnson said. “But I’m still blessed and life goes on.”