Efforts to preserve one of Mississippi’s most famous landmarks underway. Attempts to stabilize such a large ruin unprecedented, officials say 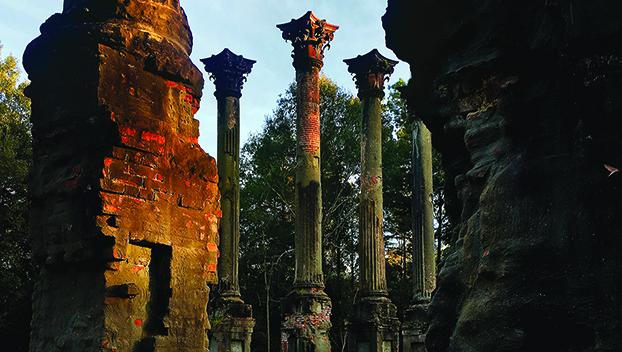 Officials say they have ventured on a project to stabilize and preserve one of the state’s most famous landmarks that is unprecedented.

More than a century of destructive exposure to the elements has caused significant erosion to the 45-foot-tall Corinthian columns and fracturing of cast iron capitals on the columns of Windsor Ruins.

Officials from the Mississippi Department of Archives and History (MDAH) say a project to stabilize the Windsor Ruins site will continue through the spring of 2023.

The stabilization project includes the repointing of masonry, infilling voids in the columns with new masonry, pinning and securing the failing stucco finish and conservation treatments to the cast iron capitals. The masonry and stucco stabilization is 85 percent complete, with the capital conservation remaining to be completed. Temporary fencing has been erected to protect visitors at the site from falling debris, while repairs continue for the remaining 23 full columns and five partial columns.

Windsor Plantation was constructed for planter Smith Coffee Daniell II from 1859 to 1861. One of the largest private residences in Mississippi before the Civil War, the mansion originally featured 29 Corinthian columns.

The mansion was designed in an eclectic mix of Greek, Italianate and Gothic architectural styles by David Shroder and artisans from New England and Europe, and construction labor was primarily completed by enslaved people. It was believed that some of the missing columns and components were lost during the 1890 fire that destroyed the residence. A 2017 study of the site showed that four of the missing columns were still standing as late as 1910.

“To our knowledge, a project to stabilize a ruin like this has not been attempted at this scale in the United States,” said MDAH chief of preservation Mingo Tingle. “MDAH staff, WFT Architects and architectural conservator, George Fore, have worked seamlessly with Cangelosi Ward General Contractors, and United Restoration & Preservation, Inc. to address the stabilization process and specific conservation needs of the Windsor Ruins.”

Although this project has been developing for years, this is considered an emergency stabilization. There are larger initiatives that involve telling a much broader story of the region, including new interpretation at Windsor.

“The site serves as a tangible and symbolic connection to the cultural, economic and political environment of mid-to late-nineteenth century rural Mississippi,” said Barry White, MDAH’s director of historic preservation. “Once the stabilization project is completed MDAH plans to update interpretive signage to reflect to site’s broader significance in history regarding pre-contact, slavery, the Civil War, sharecropping and the evolution of the preservation movement.”

MDAH launched a social media campaign in 2019 seeking photographs of the Windsor Ruins site, taken between 1942 and 1971, to determine when the last missing column was lost. MDAH staff used the public’s photo submissions to help establish a timeline of past column collapses and predict when future collapses may occur. It was determined that the last column collapse occurred in the early to mid-1960s. MDAH commissioned architectural conservator George Fore also found evidence relating to the timeline of column integrity during the period of public outreach.

Family photos submitted by Ruthie Drake Fahey, a native of Port Gibson, were especially helpful having been taken only a decade after the Windsor mansion fire.

“Fahey’s family photos, which were likely taken circa 1900, contain what may be the oldest known photos of the site,” Tingle said.

Built near the town of Bruinsburg in Claiborne County, the Windsor Ruins site is located near the section of the Mississippi River where Union Army General Ulysses S. Grant directed soldiers to cross the river from Louisiana in their quest to capture Vicksburg. Windsor Ruins was listed on the National Register of Historic Places in 1971, acquired by MDAH in 1974, and designated a Mississippi Landmark in 1985. See Tingle discuss stage 1 stabilization work currently underway at Windsor Ruins in this MDAH video.