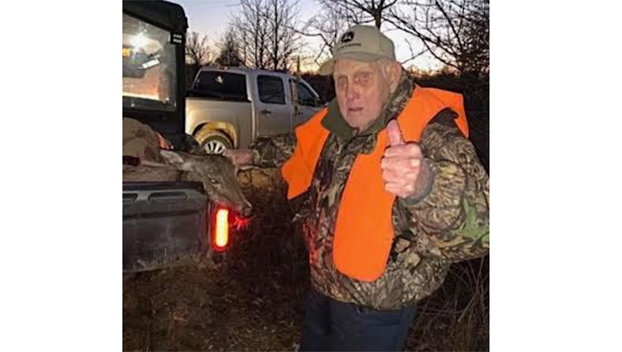 One of the most inspiring local hunting stories in recent years is that of Webster Mehan, a 93-year-old Pope man who’s been determined to shoot a deer since he began venturing out with his grandson, Benny Wilson, a few years back.

Mehan finally turned his dream into a reality on the afternoon of Thursday, Dec. 15, when he killed a big-bodied doe on a piece of property in Quitman County where the landowner had offered them access.

Wilson said that the long delay of his grandfather killing his first deer was not for lack of trying, since the duo first deer-hunted on the Spring River in Hardy, AR,  in 2019 – when Mehan was only the tender age of 90 – but that they could “just never close the deal.  I would see a deer but he just couldn’t get on it, or didn’t see it, and it went on like that.”

In a Panolian feature story three years ago when Mehan began hunting, the nonagenarian said he spent a lifetime working and tending to his family, never having time to hunt or a good place.

Despite Mehan’s growing enthusiasm and resolve to finally kill a deer, this year’s weather has been an obstacle since the past month hasn’t been as cool and frosty as North Mississippi hunters might have hoped. There haven’t been many great opportunities to get out with his grandson.

“He’s been really talking about it,” said Wilson, “saying ‘son, I’d like to get me a deer.  I don’t know how much longer I got left on this Earth.’”

Wilson assured Mehan that they’d figure out a solution, then reached out to the local community on social media about their crusade, and in short time were offered a nearby place to hunt.

Wilson said they had seen some other deer that afternoon, and that there had been a couple of opportunities, but that it wasn’t until shortly after readjusting his grandfather’s Thompson Center .308 bolt-action rifle that the moment finally arrived.

“I told him, the gun’s pointing right at where it needs to be, so get on the deer.  And when you’re on it, pull the trigger.”  Wilson had been showing him hunting videos the night before, and brushing him up on basics. “He made a perfect shot.”

At first, Mehan thought he missed his mark, but Wilson assured him that he had absolutely not.  “Once he realized he actually hit the deer, and we got it out, he was very emotional,” he said, of his grandfather and best friend, as he eventually took it all in.

With tears in his eyes, Mehan said, “You told me this was how it was gonna feel, when I killed my first deer.”

According to Wilson, he was thanking and praising Jesus for allowing him, at 93, to experience such a moment in life with his beloved grandson.  Of course there was excitement and relief, but also the emotion of appreciating the life that’s been taken.

Videos taken by Wilson during the hunt and after the deer had been shot show an emotional Mehan, eyes tearing and barely able to speak because of the excitement. The bond between grandfather and grandson is evident and touching as the two share the special moment. The videos are posted on Wilson’s Facebook page and will be on the Panolian’s page later this week.

Above all, Wilson hopes his grandfather’s achievement can inspire other ambitious hunters of age, or with any sort of physical deterrent, to maintain their diligence to kill their first deer regardless of the obstacles.

“I’ve killed many deer in my lifetime, since I was a little bitty boy, and what I experienced with him meant more to me than anything I’ve ever done – just being there,” said Wilson.

Having hunted and fished his entire life he takes some pride in getting his grandfather more involved with the outdoors, because he had once enjoyed hunting rabbits and squirrels in his youth, back when there weren’t any kind of deer yet inhabiting the area.

“I’m going to continue to take him as long as he’s able to go,” said Wilson, who returned with Mehan to the same shooting house days later, but unfortunately only spotted one deer far off in the distance.  The shooting house is heated, insulated, and very comfortable for Mehan, who is also conveniently dropped off right at the door by a side-by-side vehicle.

Since Mehan was wearing a branded camouflage jacket made by West Point, Mississippi-based Mossy Oak, Wilson tried to contact the outdoor lifestyle company to share the story of his grandfather’s fascinating journey, but still hasn’t received a reply.

“I’m not trying to get anything out of it.  They just have the ability to spread the word.  Maybe somebody’s thinking about doing this in their older age, and they see this and say, ‘Oh my gosh, that inspires me,’ and that if you put your mind to it, you can do it.”