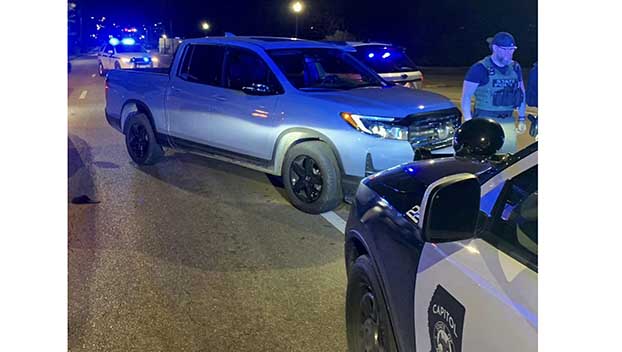 Mississippi police chased down armed carjacking suspects and arrested one teen and a juvenile Wednesday night.

At approximately 7:06 p.m., Capitol Police responded to an armed carjacking that occurred on Gillespie Street in the Belhaven area.

After identifying the vehicle, officers attempted to initiate a traffic stop and the vehicle fled the area.

The driver of the stolen vehicle led officers on a brief pursuit that ended near Fortification and Lamar Street. All property that was stolen was recovered and three subjects were apprehended on scene with no issue.

21-year-old Ladarius Williams, 18-year-old Antione Alexander Gibbs, and one juvenile will each be charged with armed carjacking, conspiracy, felony evasion, possession of stolen property, taking possession of/taking away a motor vehicle, and possession of a stolen firearm.

“Thank you to Sheriff Tyree Jones and his deputies for their cooperation and assistance with this incident,” said Chief Bo Luckey. “When we work together, we are able to combat crime and continue to make Jackson a safer city.”

This case remains open and is still under investigation. Additional arrests and charges are likely.

“There are no boundaries when it comes to crime and we are glad to be in partnership with other agencies as we continue to address our crime issues,” said Sheriff Jones. “Good job to all involved for swift response and getting these bad actors out of our communities.”