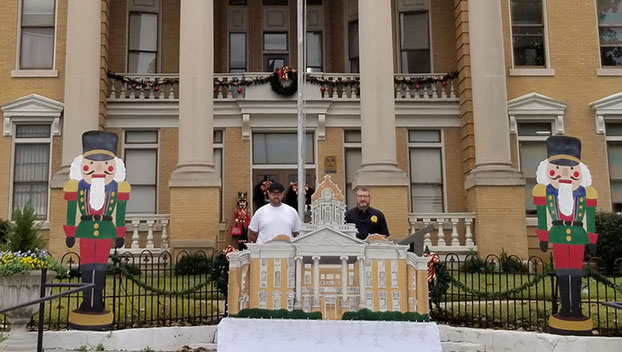 MDOC inmate Brian Dolan and Sheriff Paul Mullins display the artwork used as the Simpson County Sheriff’s Department’s Christmas parade float earlier this month. Dolan painted a replica of the Simpson County Courthouse as the main piece of art for the float.

The Simpson County Sheriff’s Department enjoyed a yuletide gift as the winner of three local Christmas parade contests thanks to the artistic talents of an MDOC inmate.

Brian Dolan, MDOC#M2062, is serving 43 years for mostly drug charges and is assigned to the Joint State County Work Program in Simpson County.  There, he used his talents for the creation of an 8-by-6-foot painted model of the county’s century-old courthouse, down to the window panes and bricks.  Dolan painstakingly color-matched his model to render a life-like recreation for use on the sheriff’s float.  The department won first place for parades in Mendenhall, Magee, and D’Lo this month with the theme of “Hometown Christmas.”

Dolan said the wins mean a lot to him as an affirmation of his skills that have improved his life. By channeling his creativity, Dolan says he has a renewed mindset and goal of not returning to prison.

“I was pretty proud when it was all done. I loved seeing the reactions from people who saw it. I was blown away when I heard that we had won all three parades,” said Dolan, who has resided in Simpson County’s inmate work program since January 2022.

Simpson County Sheriff Paul Mullins said Dolan is an example of the talent in inmates that comes through the work program which has been a blessing for the county.

It meant a lot to have our own inmate paint this and win. We could have had someone from the outside do it, but it meant so much more to have one of our own inmates to paint the courthouse. That is what sold everyone on us winning first place. When he was done, it was ‘wow, phenomenal,’” Sheriff Mullins said.

Dolan said he was excited about the opportunity to participate in the department’s parade float. “The sheriff came to see me and wanted to know if I could draw the courthouse because they knew I could draw. I said sure, that I would give it my best shot. I had never done anything this big before,” Dolan said of the eight-foot wide and six-foot tall project.

Using a photo of the north side of the courthouse, Dolan projected the image onto a large piece of plywood and etched it out. He cut it out with a jigsaw and painted the base coat for the building itself. Dolan taped it off to add the white colors and used a graphite pencil set for the detailed drawing. Dolan worked daily four to five hours and completed the project in two weeks.

“The big challenge was to copy the same thing on both sides of the plywood. I don’t have a photographic memory. I depended on the photo for both sides, and touched up where I could,” Dolan said. Other inmates came in to help build the frame, placed it on a trailer, and outlined it with lights with Christmas trees with the sheriff’s logo.

Dolan said he is self-taught in art, going back to his childhood and enjoying early success. He won an art contest at 15 and then had a chance to take art lessons from national cartoonist Charles Schultz who invented America’s iconic Peanuts series. But Dolan’s family could not afford to send him to redeem the prize. He later won a statewide art contest and a trip to the Mississippi Governor’s Mansion in the early 1990s.

After high school, Dolan left art alone for a while and experienced legal issues leading to incarceration.

“I get to use my skills and talents as a rehabilitative tool,” Dolan said. “It has given me motivation and skillsets that I can carry to a job. That is really what matters. Without that, I don’t know if I would make it again. Now I see I can tackle a challenge, complete it, go through the step by step process without skipping steps.  Learning from the process has really opened my eyes that I have another chance.”

Dolan said if he is granted parole in 2026, he has an opportunity to stay in Simpson County and work for the sheriff in some capacity. “The sheriff lets me use my artistic abilities and I appreciate that opportunity. I use it as a coping mechanism for being in prison,” Dolan said. “Sheriff Mullins has provided a great support system and helped me to be a better person. He has opened doors of opportunities for me.”

Sheriff Mullins said he believes in the inmates’ redemptive abilities. “We have a lot of talent that comes through the joint work program. We have plumbers, electricians, artists, just about any trade you can imagine. Most of the people end up here because they have an addiction, but they are very talented individuals,” Mullin said. “Their participation in our work program has saved our county a lot of money.”

Dolan agreed. “You never know where art can take you. I have a new outlook on life and I feel like I have something to work for and look forward to. This time, it is going to be different.”