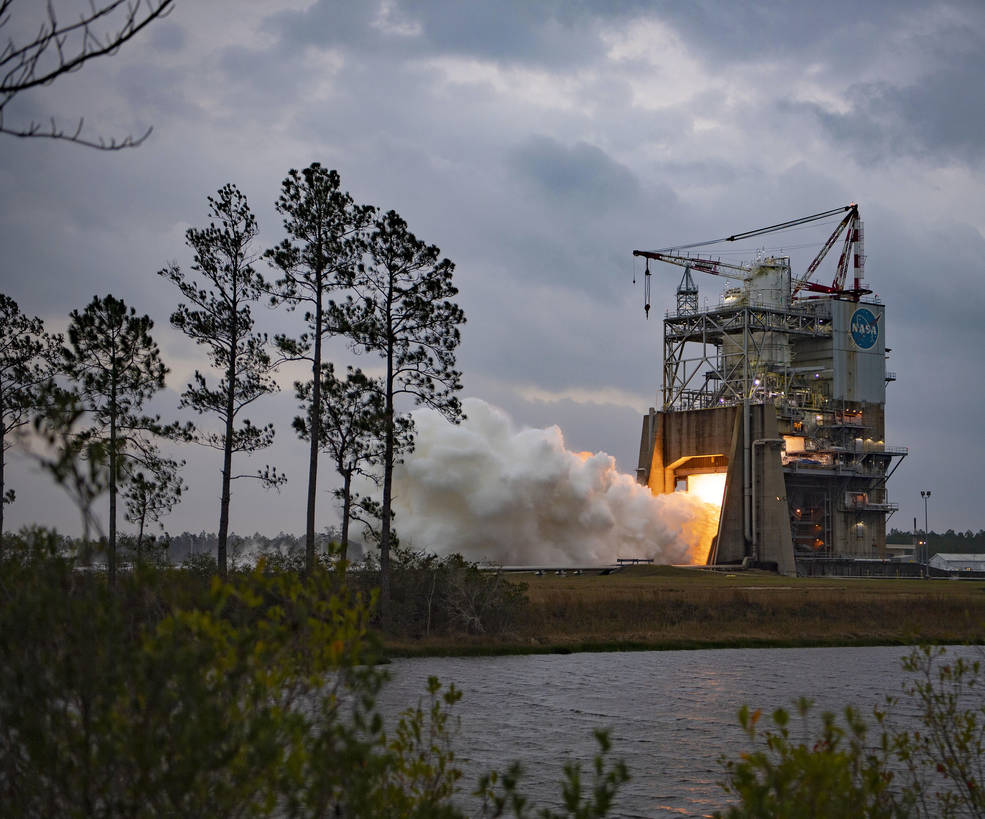 The hot fire test was shut down early by a non-flight system used to monitor the engine. NASA and Space Launch System lead engine contractor Aerojet Rocketdyne are analyzing data to review the monitoring system, evaluate engine performance, and identify the reason for the early test cutoff. Because the test was being done for redesigned engines in support of Artemis V and beyond, no impacts to RS-25 hardware for earlier missions is expected.

“Much like launch, test campaigns are dynamic events that allow us to learn more about the SLS rocket hardware,” said Johnny Heflin, liquid engines manager for the Space Launch System at NASA’s Marshall Space Flight Center in Huntsville, Alabama. “NASA and Aerojet Rocketdyne teams were successful in running the first test of the new RS-25 restart engine for 209.5 seconds that will help power future missions with the SLS rocket. Preliminary data indicates the engine was performing nominally. Data analysis is underway.”

The single-engine hot fire, known as a confidence test, was designed to confirm all is ready to proceed with a series of certification tests early next year on a full RS-25 certification engine. NASA and the company modified 16 of the engines remaining after the Space Shuttle Program for use on Artemis mission I through IV. The upcoming series of testing is for the RS-25 engines that will be used, beginning with Artemis V.

“Each test, even one that does not go full duration, helps us gather valuable data and helps us prepare to fly safely,” said Chip Ellis, Stennis RS-25 project manager.

The test on the Fred Haise Test Stand at Stennis came just days after NASA successfully completed the Artemis I flight test in preparation for future missions to the Moon.

The test provided initial data to aid NASA and Aerojet Rocketdyne as the company prepares to begin production of new RS-25 engines to power future Artemis missions to the Moon and beyond. For each SLS flight, four RS-25 engines, along with a pair of solid rocket boosters and core stage, help power the rocket at liftoff.

The hot fire was testing new RS-25 components to be used in production of future engines, including a new powerhead component. Additional components, including a new nozzle and controller, will be installed on the engine prior to the start of the certification series.

Four RS-25 engines help power each SLS flight, firing simultaneously to generate a combined 1.6 million pounds of thrust at launch and 2 million pounds of thrust during ascent. Every RS-25 engine that will help power SLS will be tested at Stennis. RS-25 tests at the site are conducted by a combined team of NASA, Aerojet Rocketdyne and Syncom Space Services operators. Syncom Space Services is the prime contractor for Stennis facilities and operations.

Through Artemis missions, NASA will land the first woman and the first person of color on the surface of the Moon, paving the way for a long-term lunar presence and serving as a steppingstone on the way to Mars.