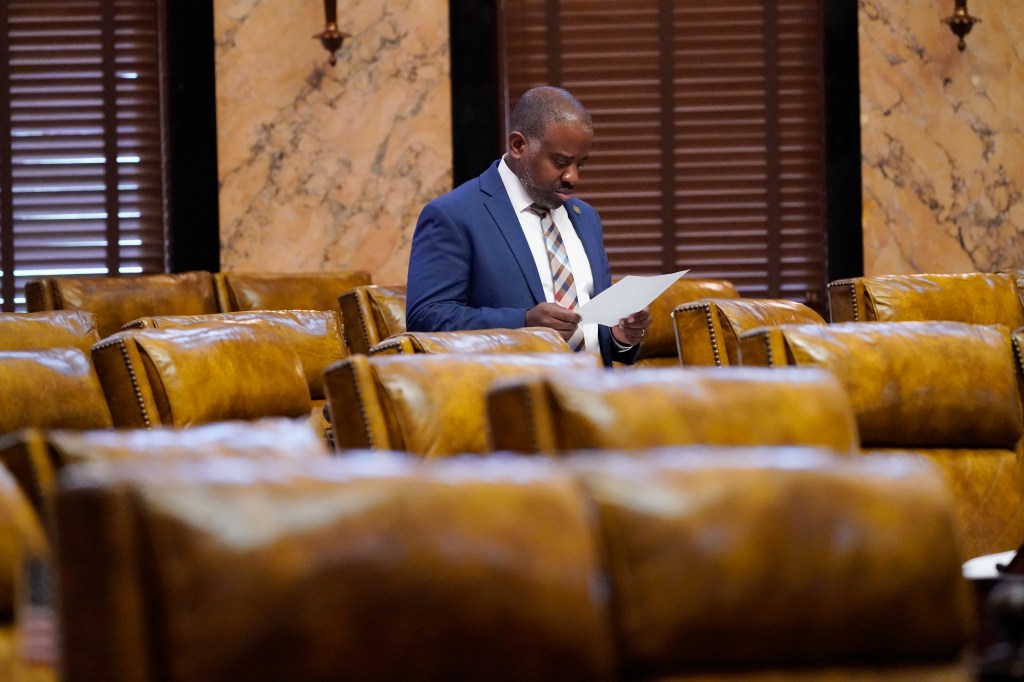 Rep. Ronnie Crudup Jr., D-Jackson, studies an updated grid of the total state support for agencies for fiscal year 2023, in the House chamber at the Mississippi Capitol in Jackson on April 4, 2022. Crudup Jr., who has represented south Jackson since 2019, was preparing for the Legislature's upcoming return to session on Jan. 3 when he lost water on Dec. 24, 2022, after frigid weather upended infrastructure across the Deep South. (AP Photo/Rogelio V. Solis, File)

In Mississippi’s capital city, where intermittent periods without running water have become a fact of life for residents, a new disruption to the long-troubled water system persists just days before lawmakers are set to arrive for the state’s 2023 legislative session.

Amid frigid weather that upended infrastructure across the Deep South, pipes in Jackson broke and the city’s water distribution system failed to produce adequate pressure. Crews have spent days working to identify leaks, but pressure still hasn’t been fully restored and a boil water notice remained in place Friday.

City leaders said the water system remains vulnerable to weather-related disruptions, and Jackson-area legislators face the prospect of returning home from the Capitol building each evening without access to water in their homes.

Democratic state Rep. Ronnie Crudup Jr., who has represented south Jackson since 2019, was preparing for the Legislature’s upcoming return to session on January 3. Then, on Dec. 24 — just three months after a breakdown in Jackson’s water system left many in the city of about 150,000 without water to drink, cook, bathe and flush toilets — it happened again.

On Christmas Eve, after the last of Crudup’s running water went down the drain, his spirits sunk along with it.

“I’m normally very optimistic in pretty much all situations, but this latest water situation is getting the best of me,” Crudup wrote in a Dec. 26 social media post. “Y’all pray for me and my Jackson neighbors. I know if I’m struggling, others are also.”

In early September, Crudup could have often been seen handing out cases of bottled water as the late summer sun baked the parking lot of the New Horizon Church, which his father, Rev. Ronnie Crudup Sr., founded in 1987. His t-shirt of choice during those long afternoons was emblazoned with the motto he applied to the task at hand: “Embrace the grind.”

On September 15, water pressure was restored to most of the city and the citywide boil water notice was temporarily lifted, only for issues to resume three months later. Crudup began to feel the burden of successive periods in which a basic necessity became a scarce resource for his family and his constituents.

“As a man, how am I to take care of my family in the midst of this? As a political leader, how do I serve my constituents? All of my feelings were internalized, and I didn’t have any method of getting all that out,” Crudup told The Associated Press.

After Crudup’s brother saw his Dec. 26 social media post, he picked up the phone with a set of questions.

“Why are you frustrated? Why are you feeling this way?” Crudup recounts his brother asking. “By him asking the right questions, I was able to talk myself through it.”

Crudup said he wants Jackson’s residents, some of whom spent the Christmas holiday looking for a place to shower, to avoid what he called “internalizing the burden.” At New Horizon Church, Crudup works closely with his father, and together they’ve talked through the strain of seeing their neighbors at the mercy of an unreliable water system.

“You’ve got a lot of children who aren’t brushing their teeth and all these other things. Particularly dealing with a lot of the least of these who don’t have the kind of resources he or I, or other people have, it weighs on him,” Crudup Sr. said. “And we do talk about that.”

The $600 million in federal money that Jackson is set to receive for its water system has the potential to “revitalize a whole lot of the economic circumstances,” that have hindered necessary structural repairs, Crudup Sr. said.

Ted Henifin, the manager appointed by the U.S. Department of Justice to help fix the long-troubled water system, said he intends to make substantial progress over a one-year period on a list of projects that will protect the city from future disruptions.

As the wait for a reliable system continues, Crudup Jr. said he will encourage Jackson residents to talk through their frustrations with one another.

“People are really stepping in to help their neighbors, not only physically but mentally,” he said. “We know there will be better days ahead, it’s just about making it through this last point.”