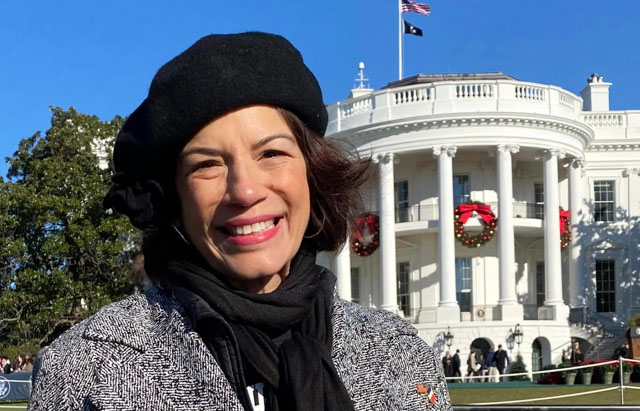 Keltoum Rowland, senior lecturer in French for The University of Southern Mississippi’s (USM) School of Social Science and Global Studies’ World Languages Program, was invited to attend two events earlier this month honoring the president of France, Emmanuel Macron, and his wife Brigitte, at the Embassy of France and at the South Lawn of the White House during his official state visit to the U.S.

Rowland serves as Honorary Consul of France in Hattiesburg, a title she has held since 2011. “He (Macron) thanked the French community in America for our work and said ‘Long live the friendship between the United States of America and France’ during his visit,” she said.

Rowland said Macron was received with pomp and pageantry at the White House, solidifying that France is the U.S.’s oldest ally, including a 21-gun salute and French words by President Joe Biden “Liberté, Egalité, Fraternité.”

“The crowd went wild,” Rowland said. “One could tell there was a genuine camaraderie between the two of them.”

Macron also addressed the Franco-Louisiana relationship during a visit to New Orleans, the defense and protection of the Francophonie (the global French-speaking communities). He is the first president of France in approximately 50 years to visit the city, which was founded in 1718 by French colonists and named for the Duke of Orleans. He made a promise to protect the French language in schools with the creation of a program.

“We want the French language to be a language for all and therefore give a fresh image of the French in the United States,” Macron said during his visit.