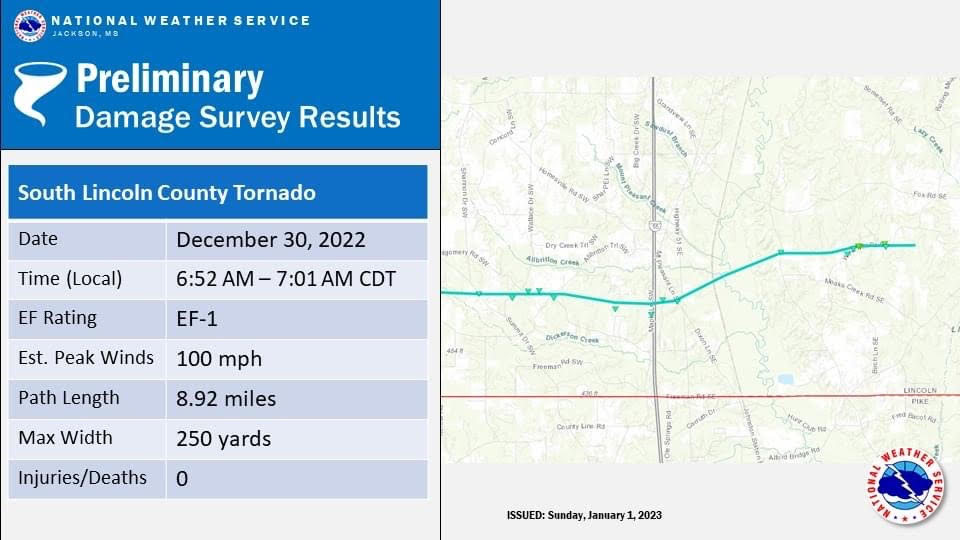 This past Friday, the Storm Prediction Center saw some weather ingredients coming together they had not previously seen. That’s when they expanded the slight risk of severe weather that was originally only for a small portion of Mississippi around the Gulf Coast region to include much of the southern half of the state. Not long after, severe storms hit Lincoln County, causing damage.

According to the National Weather Service in Jackson, two areas of damage were reported in the county. After a team traveled south on Sunday, there were two causes found.

First, the team confirmed tornado damage just north of the Pike County line. The twister’s path was 8.92 miles, crossing I-55. Damage was rated EF-1 with peak winds of 100 miles per hour. It began about 6:52 a.m.

Second, the team confirmed damage in northwestern Lincoln County to have been caused by straight-line winds. The damage was found in the area just north of Highway 550. Peak winds were estimated at 74 miles per hour and began around 6:40 a.m.

Another round of severe weather is expected to begin this evening and last through Tuesday across the state. We’ll have a full update later this afternoon.