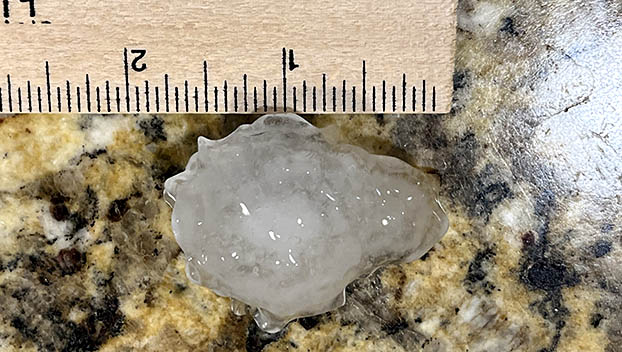 A picture of hail recorded in Natchez, Mississippi, Tuesday night.

Storms accompanied with large and hail and high winds dogged Mississippi residents for most of Tuesday as a slow-moving front moved through the state.

One resident from Natchez, in the southwest corner of the state, photographed hail that was 2 inches in diameter when it pelted the area Tuesday night.

The massive storm system that doused the South in flooding rainfall and churned up damaging tornadoes continued to plague the region prompting numerous water rescue operations.

While at least four potential tornadoes were reported by the National Weather Service’s Storm Prediction Center over the past two days, flooding remained the prevalent concern Tuesday with reports spanning from eastern Texas through northwestern Louisiana and into Kentucky in the span of 24 hours.

At least 4.99 inches of rain fell in 48 hours over Greenville, Kentucky, where the fire department told AccuWeather on Tuesday that it had responded to 15 water-related incidents, including stranded motorists and water rescues from residents, between 4:30 a.m. and 7:30 a.m., local time. No injuries were reported.

Rainfall totals were the highest in Arkansas, however, where DeWitt, located in the eastern portion of the state, recorded 8.55 inches of rain over 12 hours Monday night. Taylor Rodriguez, the EMA director of Arkansas County, where DeWitt is located, told KARK 4 News and Fox 16 News Meteorologist Joel Young that roads were flooded in and around the city, including Highway 130 and U.S. Route 165 on both sides of the town. As of Tuesday morning, officials were asking people to stay home if possible and to avoid any flooded roads.

Residents in Louisiana, Arkansas and Texas were still reeling Tuesday morning after the storm’s rampage the day before when strong winds and a handful of possible tornadoes knocked out power and damaged buildings.

At least 14 homes were damaged along with multiple commercial and local school district buildings in Jessieville, Arkansas, an unincorporated community north of Hot Springs in Garland County, after severe weather swept through the area. On Tuesday, SPC reports attributed the damage to the Jessieville High School football stadium to a potential tornado, though noted further investigation would be needed to determine the path.

Accuweather contributed to this story.