Remains of helicopter that crashed in Gulf of Mexico located. Second Mississippi man reportedly onboard. 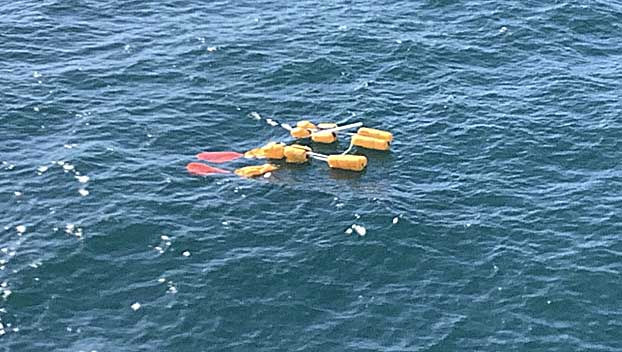 Four days after a helicopter crashed in the Gulf of Mexico, killing four men, reports are that the remains of the helicopter have been located.

WLOX in Biloxi reports that the family of David Scarborough, one of the men killed in the crash, confirmed that the helicopter had been located.

On Dec. 29,  the U.S. Coast Guard suspended its search for the four men on board the helicopter when it crashed while departing an oil platform.

Crews will likely resume the search for the bodies of the men now that the helicopter has been located.

The helicopter’s pilot and three oil workers went down around 8:40 a.m. on Dec. 28 about 10 miles offshore of Southwest Pass, a shipping channel at the mouth of the Mississippi River southeast of New Orleans. Helicopters routinely transport workers to and from oil platforms in the Gulf.

One of the men was Scarborough of Lizana, Mississippi, according to his wife, Lacy Scarborough.

Another Mississippi man was reportedly on the helicopter. The Clarke County Tribune reports that Tim Graham of Quitman, Mississippi, was also onboard.

Weather didn’t appear to be a factor in the crash, Hernandez said, as there were no reports of storms in the area Thursday. The National Transportation Safety Board said it is investigating the crash. The NTSB said it should have a preliminary report in a few weeks.

Crews in a boat and a helicopter searched for eight hours, covering an area of roughly 180 square miles. Hernandez said that crews did find debris, but no people. Photos of the debris released by the Coast Guard showed a cluster of cylindrical yellow objects bobbing in the water.

Hernandez said the oil platform is operated by Houston-based Walter Oil and Gas. A spokesperson for the company did not return a request for comment by The Associated Press.

The Coast Guard said the helicopter is owned by Rotorcraft Leasing Company, which did not respond to requests for more information.

Two weeks ago, another of Rotorcraft’s helicopters crashed off the Louisiana coast while attempting to land on an oil rig platform.