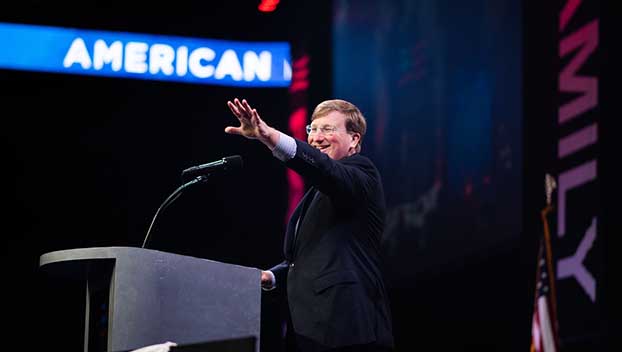 Feb. 1 is the qualifying deadline for an election that will include statewide offices, state district offices, legislative seats and county offices. Party primaries are scheduled Aug. 8, with runoffs Aug. 29. The general election on Nov. 7, with runoffs Nov. 28.

Mississippi, Louisiana and Kentucky are the only states electing governors this year.

Reeves, a Republican, called a news conference to announce his plan to seek a second four-year term, touting the state’s efforts on his watch to limit abortion rights, increase workforce development, raise teacher salaries and cut the state’s income tax.

“We had the opportunity to accomplish what I believe to be the most significant win in the conservative movement in my lifetime. Mississippi led the way in overturning Roe v. Wade,” Reeves said. “I am so proud that Mississippi did that.”

Reeves said his term was complicated by 14 natural disasters that have occurred in Mississippi since 2019. He also oversaw the state’s response and the COVID-19 pandemic and to a water crisis in its capital city of Jackson, although he has faced criticism from some Democratic officials for limiting funds for infrastructure upgrades.

Brandon Presley, a Democrat who serves as one of three members on the Mississippi Public Service Commission, is seen by some as a potential candidate for the Democratic nomination for governor.

“I can tell you this, whatever I do next in my career will continue to be focused on improving the lives of average Mississippians who can’t write a $1,000 campaign check, and who need state officials with some real backbone to stand up for them, their families and their communities,” Presley said in a statement Tuesday.

Presley is a distant relative of music icon Elvis Presley, who was a Mississippi native.

Waller told The Associated Press that he is “strongly considering” mounting another gubernatorial campaign to challenge Reeves in 2023, citing concerns over population decline, hospital closures and “corruption” related to a welfare scandal that has roiled the state.

“I think things have deteriorated since I ran four years ago,” Waller said.

Foster announced Monday he will bypass a run for governor this year and will instead run for a seat on the DeSoto County Board of Supervisors in north Mississippi.

In a written announcement, Foster criticized policies adopted by his party during the COVID-19 pandemic.

“We have an establishment group of uni-party politicians running our state GOP who not only didn’t stand up for liberty when we most needed them to, but they all mostly participated in the pageantry of tyranny,” Foster said.

Reeves is Mississippi’s 65th governor. If reelected, he would be the state’s fourth governor to earn a second consecutive term. Until the late 1980s, Mississippi banned governors from serving back-to-back terms.