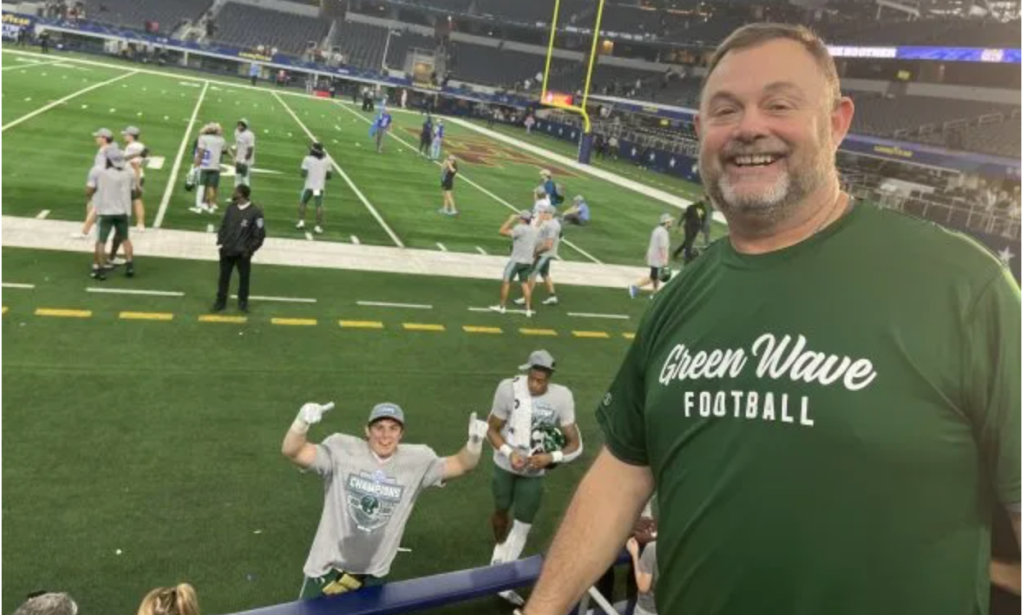 Cathedral line coach Kurt Russ takes a selfie with Tulane’s Will Wallace. He was a former player at Cathedral and won the Cotton Bowl in Tulane’s 46-45 win over USC. (Kurt Russ | Submitted Photo)

One Mississippi high school coach said he was a proud papa watching one of his former players help lead Tulane to a 46-45 come-from-behind win over the University of Southern California.

Cathedral School alumnus Will Wallace can now add Cotton Bowl champion to his football resume. Wallace, a player from the small Natchez school, has played for Tulane for the past six years.

No. 16 Tulane won in dramatic fashion scoring a touchdown with nine seconds on the clock to knock off the No. 10 USC Trojans. It completed a comeback in a game the Green Wave didn’t lead in until the end.

Cathedral line coach Kurt Russ was in attendance for the game thanks to his wife who surprised him with tickets for Christmas.

“It was the most incredible football game I have ever seen. It had more to deal with him being in it. I’ve never been to a big bowl game,” Russ said. “I was shocked at how well Tulane traveled and they outnumbered the USC fans. The never say die, they never give up and keep scratching and fighting.“

The never quit attitude is what Russ preached to the players at Cathedral. Wallace has fought through an injury this year which limited his availability to blocking as a tight-end.

Russ said he was super proud of the way his former lineman played. He watched from the stands and was able to talk to Wallace after the game.

“I just told him I was proud of him and he was kicking tail. He was very appreciative that I came to watch him play,” Russ said. “The best way to describe it is like a papa. When they wanted to run the football he was leading the charge. I was saying ‘he is my boy, did you see how he blocked the linebacker.’ It was awesome.”

Craig Beesley watched the game from home in Natchez. Beesley coached Wallace in football at Cathedral and said it was great to see a former Green Wave player go out on top.

“He was a great athlete at Cathedral and hard nosed. I think it is what helped him get as far as he did college,” Beesley said. “It was a great fourth quarter. It is great to see him win. He is a good team leader in football. I only coached him there. He didn’t play baseball but he was a great leader and the kids rallied around him a lot.”

Russ was able to get a picture with Wallace after the game. Wallace plans to enter the NFL draft and play professional football.

Wallace will graduate from Tulane in May. Russ said Wallace has what it takes to continue playing football.

“It doesn’t surprise me at all to see him have success. He has all the talent in the world,” Russ said. “If the pros give him a shot as a blocking tight end he could play pro ball. He is fantastic.”