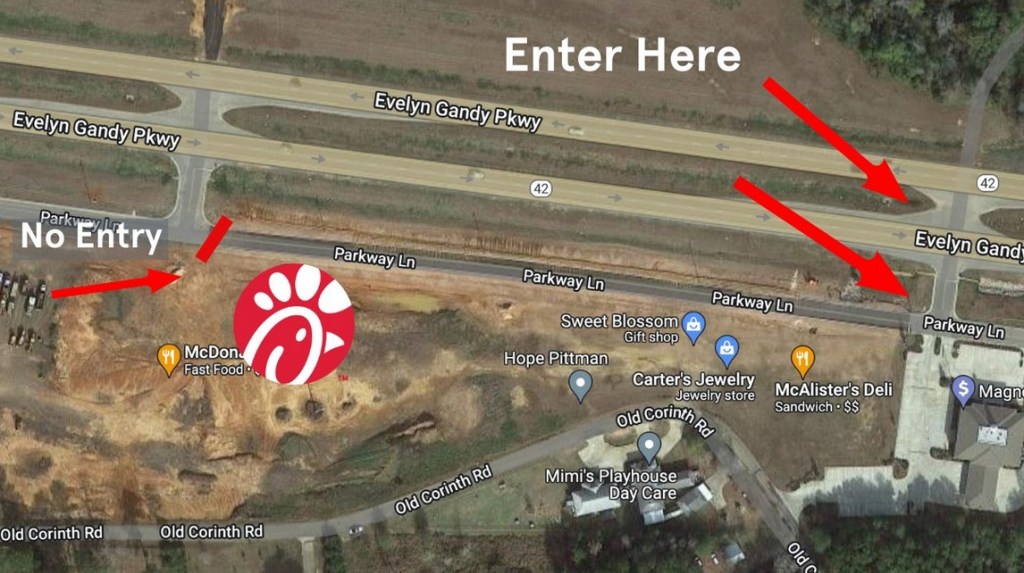 A diagram shows a change in traffic patterns for the new Chick-Fil-A in Petal.

A small Mississippi city is bracing for an influx of drivers when its first Chick-Fil-A location opens Thursday.

When the new eatery opens at 1156 Evelyn Gandy Parkway in Petal at 6:30 a.m., some entrances to the service road will be closed to detour traffic through a special area away from the restaurant. Petal Chick-Fil-A owner/operator Annah Johnson said it’s her team’s goal to avoid impacting travel along the Parkway.

“Traffic has been a concern for a lot of our citizens and we’re making sure we don’t impede anything to the best of our ability,” Johnson said. “We’ve hired some off duty Petal police officers that are going to help us with traffic on grand opening day.”

Johnson said the traffic changes are planned for Thursday, Friday, and Saturday with the hope of a return to normal traffic flow on Monday.

This area of Petal has seen an explosion of development with new fast-food restaurants, full-service restaurants, boutiques, big box stores, banks, and other businesses over recent years.

Johnson previously owned the Sawmill Square Mall Chick-Fil-A location in Laurel. She announced its closure on November 30 as her team prepared to open the freestanding location in Petal. That location served downtown Laurel for decades and was one of the oldest Mississippi locations still operating.

“It’s a bittersweet experience for us,” Johnson said. “It’s an unfortunate thing. We appreciate all of you and your loyalty and you coming in and being a part of our family.”

A freestanding Chick-Fil-A remains open on Highway 15 in Laurel with a different owner/operator.