Jim Carmody, a huge part of Mississippi football history, is dead at age 89 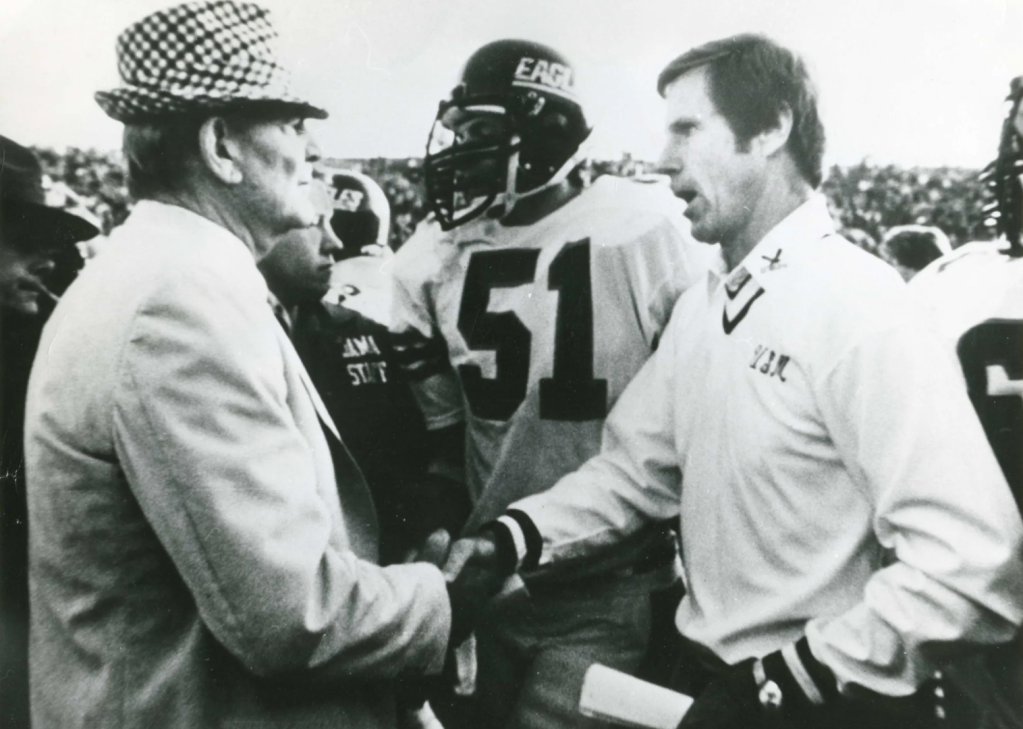 Jim Carmody, a renowned defensive football mastermind and a prominent figure in the football histories of Southern Miss, Ole Miss and Mississippi State, died Thursday after a brief illness. Carmody, a Madison resident, was 89.

“Big Nasty” was Carmody’s nickname given to him by his defensive players at Southern Miss, but the moniker had more to do with the way his defenses played. They swarmed to the football and hit hard, whether he was coaching at State, Ole Miss or Southern Miss — or in the NFL. At Southern Miss, where he was first the defensive coordinator (1978-1980) and then the head coach (1982-87), his defenses were called “The Nasty Bunch” — a nickname that endures to this day.

Carmody served two different stints at all three of the state’s largest universities — and he was part of monumental victories at each. Perhaps the most memorable of all was in October of 1982 when he was the head coach of a Southern Miss team that defeated Alabama and the legendary Bear Bryant 38-29 at Tuscaloosa, thus ending Bryant’s 59-game home winning streak. It was the first time a visiting team had won at Alabama in 19 seasons.

Reggie Collier was the star quarterback of that USM team. “Coach Carmody demanded a lot of you, expected a lot out of you,” Collier said Thursday afternoon, shortly after learning of Carmody’s death. “He was very up front with his players. You knew where you stood. You wanted to do anything you could to please him. I loved the man. I loved playing for him.”

Southern Miss had winning seasons in five of Carmody’s six years as head coach, playing most of the more difficult games on the road. He was also part of program-defining victories at Ole Miss and State. A sampling follows:

In 1977, when he was the defensive coordinator at Ole Miss, the Rebels knocked off eventual national champion Notre Dame 20-13 at Mississippi Veterans Memorial Stadium. Carmody was the architect of a defensive game plan that stymied the heavily favored Fighting Irish in one of the signature football victories in Ole Miss history.
In 1989, two years after leaving Southern Miss, Carmody was the coordinator of a Mississippi State team that knocked off nationally ranked Southern Miss and Brett Favre 26-23 before a standing room only crowd at Hattiesburg. Southern Miss had defeated Florida State the week before and had defeated Mississippi State eight consecutive times. Said Rockey Felker, the head coach of that State team, “We were the tougher team that night in Hattiesburg and it was because of Jim Carmody. He taught toughness. He instilled toughness.” While Carmody was at Southern Miss, the Golden Eagles won eight of 10 games against State. When Carmody moved to State, the Bulldogs were 2-0 against USM.
In 1992, still later in his career, Carmody came back to haunt State, this time at Ole Miss. The Rebels won that Egg Bowl 17-10 when Carmody’s defensive front held State out of the end zone on three consecutive goal line stands, 11 plays, all from inside the 10-yard-line. “That was unbelievable, really,” Carmody once told me. “I have never seen anything quite like that sequence before then or since.”
Carmody was part of Mississippi sports history in other ways. In 1987, Carmody’s USM team was the first historically white university to play against one of state’s historically black universities. Southern Miss defeated W.C. Gorden-coached Jackson State 17-7 before an overflow crowd in Hattiesburg. Carmody had pushed for the game to be played and afterward had nothing but praise for the JSU Tigers, whom he said, “were well-coached and talented and could beat a lot of the better teams on our schedule.”

Early in his career, Carmody coached on Paul Davis’s staff at Mississippi State (1964-66) and helped the Bulldogs to their first victory over a John Vaught-coached Ole Miss team 20-17 at Oxford in 1964, “Man, that was a big deal back then,” Carmody once told me. “It was on national TV and Coach Vaught had just dominated State for years and years. I remember they let classes out at State the following Monday.”

As it happens, Paul Davis was on Bear Bryant’s last staff at Alabama. In the photo that accompanies this column, you can see Steve Carmody shaking hands with Davis in the background, while Jim Carmody and Bear Bryant shake hands in the foreground.

Jim Carmody coached the late, great Ben Williams both at Ole Miss and then with the Buffalo Bills of the NFL. “Jim came to Ole Miss in my junior year (1974) and we got better real fast,” Williams once told me. “He knew how to motivate and he knew so much about technique. He made me a better player.”

Years later, when Williams was playing for the Bills, the team had an opening for a defensive coach. Williams said he told Buffalo head coach Chuck Knox, “You hire Jim Carmody and we will win our division next season.”

Knox hired Carmody away from Southern Miss. And the Bills led the league in defense and sacks and won their division. Ben Williams made All-Pro.

Jackson lawyer Steve Carmody (the oldest of Jim and Noonie Carmody’s four sons) was a fine center on the Southern Miss team that knocked off Bear Bryant and Alabama.

“He was tough, but fair. He treated me the way he treated all his players,” Steve Carmody once said of his father. “It was really neat to see your dad at work every day. Not everybody gets a chance to do that. I thought he was so successful for two reasons. One, he was so smart. And, two, he always was so thoroughly prepared. Nobody was going to out-work my dad.”

Jim Carmody was once asked about his working two different times at the three Mississippi universities, surely something nobody else has ever done. Carmody laughed before answering, “I guess that says that I didn’t burn any bridges.”