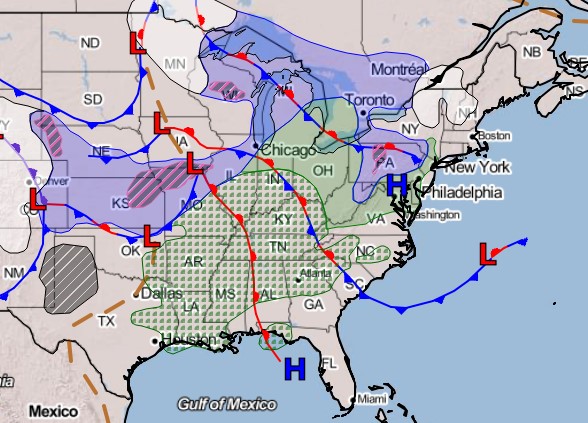 We may be only 12 days into the year, but there has been no shortage of bad weather so far. Today is yet again another chance for some strong storms and isolated tornadoes, but our forecast doesn’t include the serious wording of other recent systems.

North Mississippi got the bulk of its rain last night, but other storms will develop farther south in the state. There may be a few individual storms that strengthen to severe levels, but the main threat will be a line that forms. Some parts of the state will clear our early and end up with a beautiful day.

North Mississippi
Rain ending and temperatures falling quickly. High of 67, but dropping into the 40s by late afternoon. Wind gusts up to 30 miles per hour. Tonight, windy and cold with a low of 32 under mostly cloudy skies.

Central Mississippi
Storms early and then becoming partly cloudy later in the day. Warm in the morning with a high of 65 before temps drop into the 50s by afternoon. Wind gusts up to 30 miles per hour. Cloudy tonight with a low of 34.

South Mississippi
Thunderstorms through lunchtime, then becoming mostly cloudy. The high temperature of 69 will be reached around lunchtime, but temps will drop to the upper 50s by late afternoon. Wind gusts up to 30 miles per hour. Mostly cloudy tonight with a low of 37.

Gulf Coast
Rain likely with a few scattered thunderstorms in the area. Rain ending in the late afternoon and becoming partly cloudy. High of 73 with 10 t0 15 mile per hour winds. Partly cloudy tonight with a low of 42.