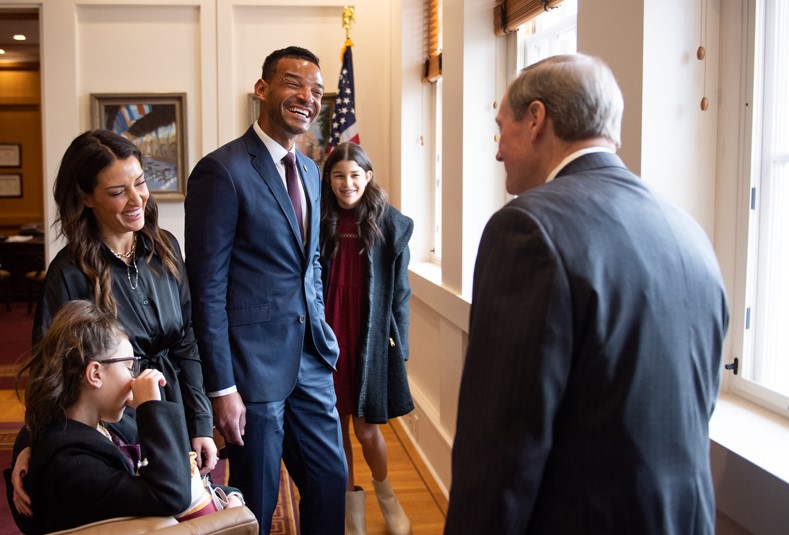 “In seeking a new Director of Athletics, we talked with some of the nation’s very best athletics department administrators,” said Keenum. “After an extensive review of those outstanding candidates, I am convinced that in Zac Selmon we found an outstanding leader with a servant’s heart – a leader who has extensive experience at two Power Five universities and who understands and shares our relentless commitment to achieving and maintaining excellence in our Bulldog athletics programs – all of them.”

As a son and nephew of the famed “Selmon Brothers” (University of Oklahoma’s Lucious, Lee Roy, and Dewey Selmon of Eufaula, Oklahoma), Keenum said Zac Selmon “grew up with powerful examples of winning at the highest levels and doing so with a deep commitment to sportsmanship and scholarship. Winning and winning the right way is in Zac Selmon’s DNA.”

“We’ve talked about the Selmons and their great football legacy. Zac’s experience as a successful student-athlete at Wake Forest is an important component as is his relevant athletics administration experience,” Keenum said. “But I think my focus during the interview process was how seamlessly Zac’s values of family, faith and character align with those of Mississippi State University.”

With his extended family, Selmon has been an active part of a multi-generational effort to bring help and healing to those at home and abroad who struggle with poverty, homelessness, lack of education, and for many, a lack of hope. He and his sister Shannon are co-founders of the Shine Foundation, a nonprofit dedicated to serving those in need, especially children, at home and abroad.

Selmon accepted the position as MSU’s 18th athletics director after having an accomplished career at the University of Oklahoma on the executive leadership team. As deputy athletics director for external engagement and advancement, he led OU Athletics’ stakeholder relations including the Sooner Club and annual giving. Selmon provided sport oversight for football and led strategic communications, marketing, licensing, multi-media rights, brand management and fan engagement.

“This is an incredibly exciting opportunity and a professional journey that I’m ready to begin,” said Selmon. “I want to thank Dr. Keenum for his confidence in me. I’m grateful to my family for preparing me from an early age to work hard and trust in God. I have a deep and abiding respect for Mississippi State’s traditions and the role this university plays in taking care of what matters in this state and nation. My family and I are eager to join the Bulldog family.”

At Wake Forest University, Selmon not only became a four-year starter at tight end for the Demon Deacons, but a dean’s list scholar graduating in 2007 with a degree in religion and international studies. He also holds a 2010 OU master’s degree in education with an emphasis in intercollegiate athletics administration.

Selmon and his wife Rachel have two daughters, Shayne and Rylee.

Keenum thanked Interim Athletics Director Bracky Brett for his service: “The continued success MSU has enjoyed during the search would not have been possible without the steady hand, hard work and wisdom of Bracky Brett. Our university, our fan base, owes you a tremendous debt of gratitude.” Brett, a 20-year veteran administrator at MSU, serves as executive senior athletics director for compliance.