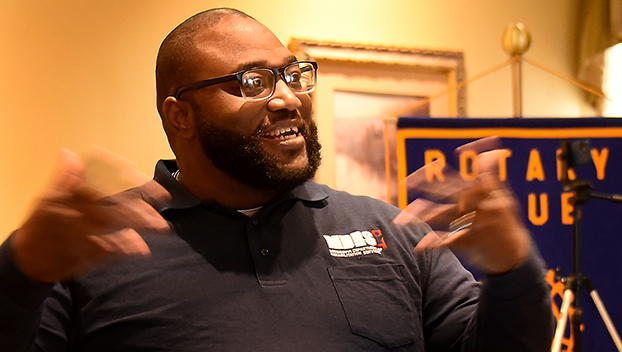 In 1994, Dwight Owens was a sixth grader in Hot Coffee, Miss., when his world turned upside down. His father was shot and killed.

In the summer of 2005, Owens got his dream job, which was going home and teaching and coaching football at Collins High School.

School was to begin on Aug. 8. On Aug. 5, he was headed to the school to work on getting his classroom set up for the new school year.

“A drunk driver who was clocked doing 120 miles per hour ran into my car,” he said.

Owens suffered numerous life-threatening injuries, including having his heart stop and having to be resuscitated. The most severe was the severing of his spinal cord, which has left him a paraplegic.”

Despite his injuries and the years it has taken him to recover, Owens said, “I know I have a purpose. My life is full of joy. No one knows what tomorrow will bring. You can be paralyzed without being in a wheel chair.”

He credits the restoration of his life after that horrific crash to the Mississippi Department of Rehabilitation Services.

“I don’t know where I would be without them,” Owens said. “When I came home from the hospital, the ramp was already here at my home.”

Owens travels the state as a motivational speaker, encouraging Mississippi residents in need of help rehabilitating after surgery or dealing with a disability to reach out to the Mississippi Department of Rehabilitation Services. He said many of the programs offered by the department have no income limit or need for qualifying.

The department’s goal is to provide services to Mississippians with disabilities in an effort to assist them in living as independently as possible and gain or retain employment.

“We can’t see tomorrow,” Owens said. “Some people among us who are hurt and suffering can find new hope through organizations like this. People in this organization will help them move forward. They gave me new confidence.