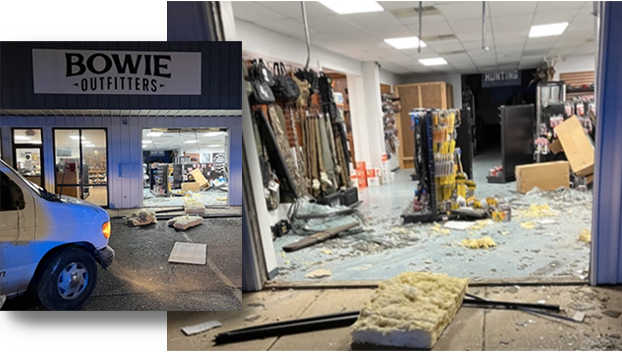 Police have taken into custody two juveniles who stole a moving van and then crashed it into a Mississippi gun and hunting store.

Natchez police report that the two juveniles stole a van from Moover Dudes on John R. Junkin Drive in Natchez andcrashed it through the front of Bowie Outfitters on U.S. 61 South.

When they arrived, officers saw a white van unoccupied in front of the business. Witnesses reported seeing a Black male get out of the van, who appeared to be looking out for the driver. After a minute or two, the driver put the van in gear and drove it into the front of the building, knocking down the glass wall.

The van then reversed and the two subjects entered the store for a short period of time, leaving on foot.

Natchez Police officers patrolled the area and located the two, who were still wearing clothing observed in video footage from the store.

Both were transported to the Natchez Police Department, then to the Juvenile Detention Center.