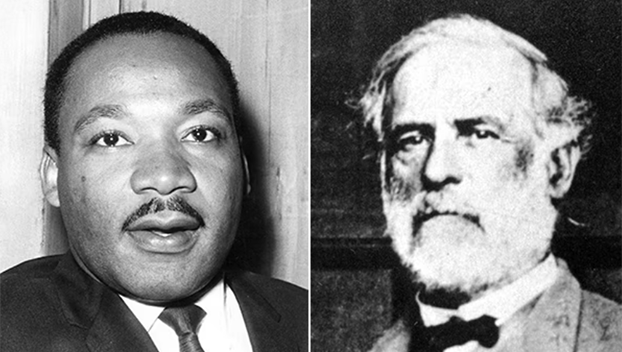 Alabama and Mississippi are the only two states that honor Martin Luther King Jr. and Robert E. Lee on the same holiday.

A Twitter post taking a bank to task for posting a sign announcing it will be closed to honor Robert E. Lee and Martin Luther King Jr. has gone viral.

The post included a photograph of the sign on a CB&S Bank door. CB&S is headquartered in Russellville, Alabama, and has branches in Mississippi, Alabama and Tennessee.

“If you live in Alabama you should pull your money out of @cbsbank /@cbsbankAL immediately,” Twitter user  said. “Unless you think Black Americans should be slaves.”

If you live in Alabama you should pull your money out of @cbsbank /@cbsbankAL immediately.

Unless you think Black Americans should be slaves. pic.twitter.com/u4OCyVQSzk

The sign in the photo reads, “HOLIDAY NOTICE: This office will be closed Monday, January 16 in observance of Robert E. Lee and Martin Luther King, Jr. Normal business hours will resume on Tuesday, January 17th.”

Banks, Post Offices and other government agencies have posted similar notices on their doors across Alabama and Mississippi, the only two states in the union to recognize Martin Luther King Jr. and Robert E. Lee.

As of Monday morning, the post has received more than 70,000 views — with hundreds of likes and several comments.

One Mississippi legislator told Mississippi Today that he believes it is time that King had the holiday to himself.

State Rep. Kabir Karriem, D-Columbus has introduced legislation, like he has since coming to the state House in 2016, to remove Lee from the holiday.

“Mississippi needs to move into the future,” said Karriem. “We have changed the state flag (to eliminate the Confederate battle emblem from the design). This is the next logical step.”

In addition, the legislation would eliminate the state holiday of Confederate Memorial Day, which is held on the last Monday in April.

Some Alabama legislators have tried to make a change, but like those in Mississippi, have been unsuccessful in making the change.

Other states, including Florida and Tennessee, set aside a day for Lee but do not combine it with the King holiday and state offices remain open.