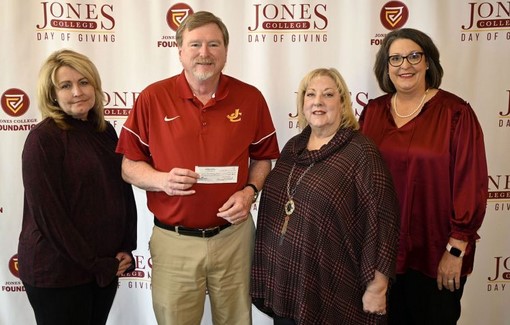 Over the last 45 years since Howard Patrick of Ellisville graduated from Jones County Junior College, he has not forgotten about the history teacher who inspired him. John Klem III taught history at JC for 14 years and Patrick took every one of his classes from 1975 until he graduated in 1977. When Klem passed away from a gunshot wound while serving as a Forrest County Deputy in 1985, Patrick was heartbroken. However, during the recent “Day of Giving” fundraising drive at Jones College, Patrick was thrilled to finally be able to publicly honor the man who inspired his career.

“Mr. Klem had a major impact on my life. I always loved history, but Mr. Klem just made it much more interesting,” said Patrick.

He further explained that after graduating from JCJC in 1977, Patrick wanted to be a teacher, but things didn’t work out until 22 years ago, when he began teaching history at South Jones High School.

The Wayne County native explained, “Mr. Klem didn’t just teach the ‘dry’ facts and things out of the textbooks; he always came up with the ‘rest of the story’ or something extra. That’s what I do for my students. I try to do a little research on the topic to make it more interesting for my students, just like Mr. Klem.”

“I was working in the oil field when I heard he died in the line of duty and it was heartbreaking,” said Patrick. “I wanted to endow a scholarship in his memory and in his honor, so his legacy will continue here at Jones College, and, hopefully, it will mean as much to some other folks as Mr. Klem meant to me. I’m glad we were finally able to do this for him and his family.”

Klem’s family was surprised that after 38 years, someone still remembered John Klem III. Teaching was Mr. Klem’s first vocation. The Forrest County resident taught at Purvis High School in 1969, and Jones County Junior College two years later. He began preaching at the Bouie Street Baptist Church in 1970, before becoming a reserve police officer for the Hattiesburg Police Department. In 1976, he joined the Forrest County Sheriff’s Department. His oldest son, John Klem IV, listened to the police scanner as a youngster and after turning 18 years of age, he joined his dad in the police patrol car on Saturday nights.

“I liked riding with my dad and watching him work but I wasn’t sure I wanted to make a career out of it,” said Klem IV. “The night he got shot, September 15, 1985, I decided that’s what I wanted to do. Six months after he passed away, I started my career with the Hattiesburg Police Department as a dispatcher.”

In 2019, Klem IV retired from the Forrest County Sheriff’s Department as a patrol deputy and a constable after 33 years. He explained he was surprised by Howard Patrick’s phone call discussing endowing a scholarship in his dad’s memory.

“I didn’t expect it and it caught me off guard. I didn’t know anyone thought about dad anymore,” said Klem IV. “It just meant a lot. When I called my youngest brother Mark, he was so excited about it.” The Klem’s middle brother James, passed away in 2021.

Amazingly, in addition to his jobs, their father also coached two softball teams: one for the police department and one for his church. John Klem IV said his dad also went to many of the little league baseball games he and his two younger brothers played in. Additionally, Klem III visited his shut-in parishioners, delivered communion and gave them a copy of the sermon after learning how to record the service. The Patricks also bragged on the popular JCJC history teacher’s woodworking skills.

“We have two wooden picture frames Mr. Klem made. His name is on the back of them,” explained Howard Patrick. “They are very special to us. We could never part with them.”

When Klem III was shot in 1985, Rebecca Patrick was working in the JCJC President’s Office, preparing for his return to the classroom.

“Because we were anticipating Mr. Klem’s return to the classroom, the college immediately began working on accommodations for him to teach. He seemed to be recovering well,” she recalled. “Then, we received the devastating news that he had passed away due to complications. It was a real shock to our whole college family.”

Ironically, many years later, Klem IV’s daughter Amber stumbled into her grandfather’s former office when she was a student at JCJC several years ago and met Rebecca Patrick who was teaching journalism at the time.

“After Amber confirmed her grandaddy was John Klem III, I told her she was standing in his former office and he taught my husband. I showed her his classroom and she just started crying. Thanks to Amber, we were able to connect with the family again and inform them about the scholarship,” said Rebecca Patrick.

While reminiscing, Klem IV remembered a time when the Hattiesburg American newspaper followed his dad for two weeks and published a section on each of his jobs as a law enforcement officer, teacher, preacher, and softball coach, as well as a father. The reserve officer’s 44 years on the earth managed to impact a lot of people, and still does to this day.

“When I’d meet people on the streets, they’d tell me they remembered my dad, and I’d ask them if he was their preacher, teacher, or arresting officer? Most of the time, they’d say he taught me at JCJC,” chuckled Klem IV.

He was only four years old when his father began teaching at Purvis High School. The youngster enjoyed coming to the JC campus on the occasion when his dad taught classes in the summer.

“I’m in awe of all the things he did from church visitations, preaching Sunday morning and evening, making phone calls, home visits and more. How did he find time to do all of this? I often wonder this because I only had two jobs and two kids, and they kept me very busy!” said Klem IV. “I am very honored that the Patricks wanted to honor my dad like this and are willing to endow the scholarship, leaving a legacy in my father’s name.”

Howard Patrick added, “I probably wouldn’t be teaching today if it weren’t for the impact John Klem made on my life. In my book, he is the ‘gold standard’ I use when teaching my students. He was the best!”