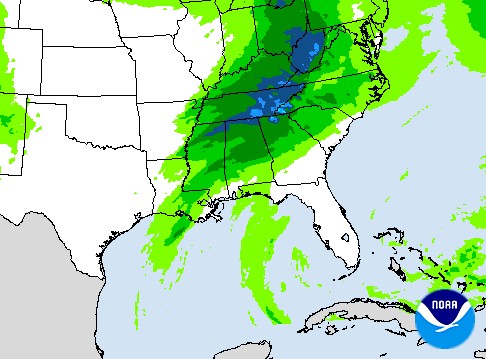 Rainfall amounts by Tuesday at noon

Our weather pattern of warm front, sunshine, cold front continues the next few days as the wardrobe confusion won’t be going away anytime soon. Some parts of Mississippi are running 25 to 30 degrees above average for this time of the year; however, as the old saying goes, “if you don’t like Mississippi’s weather, just wait a few hours.”

Areas in northern Mississippi received the bulk of their rainfall overnight, but showers and a few thunderstorms will linger across southern regions into the day today. Once that weather clears out, it will be sunny and warm across the state. The unseasonably warm weather will help create the potential for severe weather for parts of the state on Wednesday and Wednesday night.

Rain moving out and cloudy before becoming sunny with a high of 70 today. Mostly cloudy tonight with a low around 56.

A slight chance of rain in the morning, then becoming partly cloudy in the afternoon with a high near 74. Mostly cloudy tonight with a low around 59.

A few scattered showers in the morning, then becoming partly cloudy after lunch with a high near 76. Wind gusts up to 20 miles per hour. Increasing clouds tonight with a low of 61.

A couple of showers, then becoming partly cloudy later in the day with a high near 75. Becoming cloudy tonight with a low of 62.