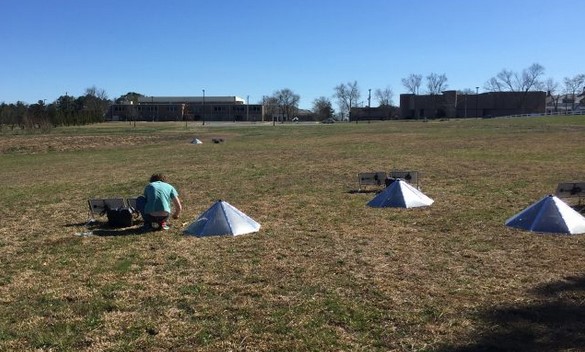 Tornado season in the South means increased anxiety, hours of televised storm coverage and watching the skies. Unfortunately, it can also lead to “warning fatigue.”

A team of researchers at the University of Mississippi‘s National Center for Physical Acoustics is working to combat this issue by developing an early warning system to detect and track tornadoes using infrasound, low-frequency sound waves that humans cannot hear.

“It’s not unreasonable that we could localize a tornado to half a football field,” said Roger Waxler, NCPA principal scientist and research associate professor of physics and astronomy. “I envision seeing a map on an app with dot that shows there’s a tornado coming up South Lamar (Avenue).

“That’s the goal, and a huge improvement over what we currently have.”

A $2 million award from the National Oceanic and Atmospheric Administration has enabled the scientists to begin a new phase of the tornado tracking project, which spans more than 10 years of research. The group, led by Waxler, will deploy permanent arrays of high-tech sensors in south Mississippi that can detect the characteristic sound that tornadoes emit.

When one of these acoustic signals hits an array, the team will be able to verify the tornado in real-time and project its path. This will allow them to analyze the data and start developing a track. Infrasound can be detected at very long ranges, making it a useful tool for monitoring and tracking.

“In the bigger picture, we hope to have real-time reporting of the analysis results from permanently installed sensor sites to a publicly accessible website,” said Garth Frazier, NCPA senior research scientist and research associate professor of electrical engineering.

Tornadoes are devastating, notoriously unpredictable and extremely challenging to detect. Meteorologists must rely on a combination of radar and human sight to both warn and confirm that one is occurring.

“Most tornado warnings are based on radar returns that show a high degree of atmospheric rotation in a supercell thunderstorm,” Frazier said. “These warnings, more often than not, are false alarms in the sense that a tornado never actually occurred.

“This leads to decreased response in the public – kind of like ‘the boy who cried wolf’ syndrome.”

The project began years ago when NCPA researchers tackled the question of whether tornadoes produce a unique sound. Since the 1970s, scientists have investigated this theory with varying results.

“There was a big tornado outbreak in Oklahoma in 2011, and we were in the right place in the right time,” said Carrick Talmadge, NCPA senior research scientist and research associate professor of communication sciences and disorders. “We managed to track an EF 4 tornado – which was an EF 5 for part of it – for 100 miles.

“That validated that indeed infrasound was being generated by tornadoes. We could watch a tornado coming toward us and the signal got more intense.”

That experiment resulted in the detection of several tornadoes more than 100 kilometers away from the sensor locations.

Most recently, the project used sensor arrays in northern Alabama, where the researchers have been able to detect virtually every tornado that occurred in that region.

“We put 10 systems out in Alabama and were able to establish that tornadoes always radiate this signal,” Waxler said. “Meteorologists were concerned we were picking up sound from the storms themselves, and we eliminated most of that concern.

“We now know how to distinguish those from tornado signals.”

Tornadoes have been known to have discontinuous paths of destruction, seemingly “skipping” into the air.

“We argue that there is always a signal there,” Waxler said. “We even have one case where the nature of the signal changed, and we could see that the tornado was in the air. It would be advantageous if we could distinguish when one was on the ground versus in the air.”

Other challenges are being addressed in the new phase of the project. The nature of the source of the signal is still unknown. Wind noise can interfere with infrasound measurements. Also, due to the travel time of acoustic signals – the speed of sound – there is a three-second delay per kilometer in tracking the tornadoes.

The team is identifying a location to deploy the new sensor network, which will consist of four long-term arrays. They chose to focus on southern Mississippi because it is a place where tornadoes are more likely to occur.

“We will work to optimize the placement of the arrays using historical maps for tornadoes in the state,” Waxler said. “Sensors will be placed on the ground under wind screens; however, cabling will be buried underground in trenches and solar panels will be placed on concrete-footed poles.”

Waxler aims to have the network deployed by summer and is hopeful that they will be able to leave it indefinitely for continuous data processing.

“Because of years of data we’ve collected, we have quite a bit of confidence that this will actually work,” he said. “Ideally, we will be able to say it does work, there is a lot of interest, and we can deploy systems throughout the state and elsewhere.”