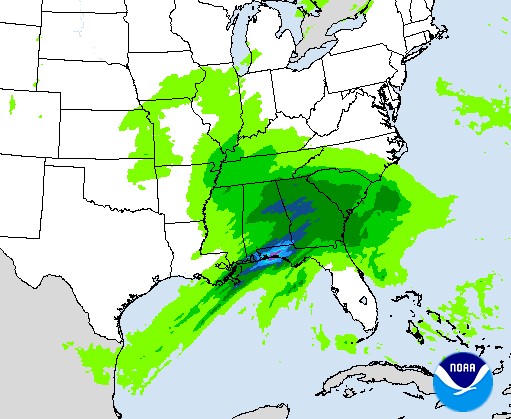 Saturday was an exceptional day to catch up on a favorite series or a favorite book with some places receiving up to three inches of rain and plenty of cold temperatures. Today will still be cloudy and cool, but the bulk of the remaining rainfall will be south of I-20. Monday is still looking like we’ll have some great weather, but Tuesday looks to be the next round of severe storms. We’ll know more details early Monday.

A stray shower lingering early, then becoming mostly cloudy with a high of 54. Mostly cloudy tonight with lows near 35. Winds could gust up to 20 miles per hour.

Showers through mid-afternoon before becoming partly cloudy. High of 60 in the morning, becoming cooler during the day. Mostly clear tonight with a low of 40.