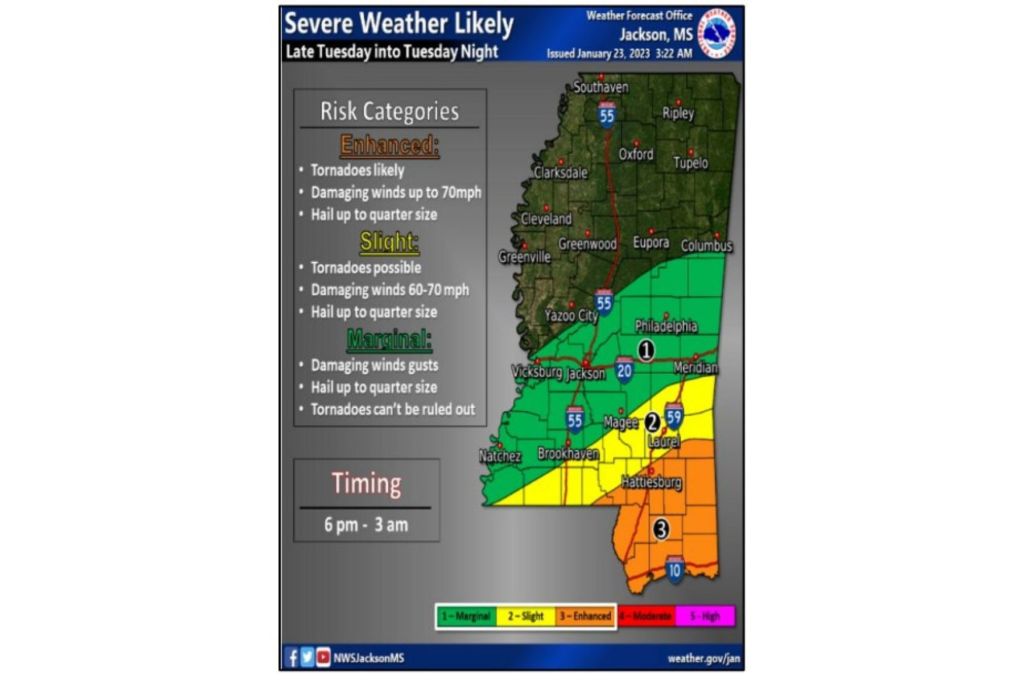 Forecasters continue to alert Mississippians about the potential for tornadoes, large hail, and damaging winds later tonight. Although parts of the state will remain cool, areas south of I-20 will warm up quickly as the warm sector of a powerful cold front takes hold. Areas that do become humid and warm today will have the best shot for severe weather Tuesday night and early Wednesday morning. Just about the entire state is under a wind advisory through Wednesday afternoon.

The Level 3 risk area includes likely tornadoes, winds up to 70 miles per hour, and large hail. Some cities in the risk area include Hattiesburg, Picayune, Poplarville, Wiggins, Lucedale, and the Gulf Coast.

A Level 2 risk includes Quitman, Laurel, Collins, Columbia, and Woodville. People in this risk level can expect possible tornadoes, damaging winds up to70 miles per hour, and large hail.

Right now, forecasters expect storms to move into the area around 6 p.m. and leave the state around 33 a.m. Wednesday.

Increasing clouds with a slight chance of rain later in the day and a high of 53. Showers tonight with a low of 38. Winds could gust up to 35 miles per hour. Rainfall up to an inch possible.

Increasing clouds with a chance of rain and thunderstorms during the day with showers and storms becoming more widespread later. High of 57. Wind gusts up to 30 miles per hour. Showers likely tonight with a few thunderstorms with a low of 41. Rainfall up to one inch possible.

Increasing clouds with a chance of rain and storms after 1 p.m. with storms becoming more widespread in the late afternoon. High of 63 with wind gusts up to 35 miles per hour. Tonight, showers and thunderstorms likely with some storms severe. Low of 44 once the storms leave the region. Rainfall up to two inches possible.