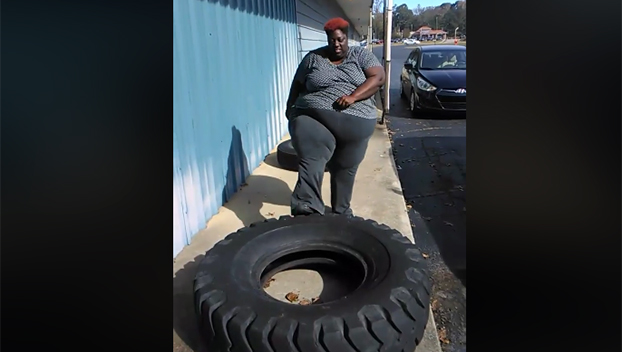 MERIDIAN — One Mississippi woman’s weight-loss journey has become a viral sensation and inspiration for thousands across the United States.

Leneathra Reed hasn’t weighed less than 600 pounds for more than two years. With the help of trainer Frank Harbin, the Meridian woman has lost 5-percent of her weight. The nearly 30 pounds she dropped has put her below 600 pounds.

Although she has many more pounds to lose, Reed is not doing it alone. Thanks to a video she posted on social media, Reed has thousands of people across the world encouraging her to continue on her weight-loss fight. One video which has 52 million views and more than 300,000 shares on Facebook has inspired others to take on weight loss as a New Year’s resolution to keep.

“She just motivated me to get off my butt and get the weight off. Keep up the good work sista,” wrote one commenter.

Reed recently told her story to the Meridian Star and to Jackson television station WAPT.

Reed said a recent surgery and the use of steroids afterward cause her weight to balloon. At 626 pounds, Reed said she was having trouble moving around her job and couldn’t breathe well. Even still, it was her two-year-old daughter who motivated her to take those first steps toward losing weight.

“That’s my heart and I just can’t see anybody else raising her,” Reed told WAPT.

Reed said she can continue to inspire others with her efforts to lose weight.

“Why not get up and get off my behind and show people that just because you’re big, that does not mean that you have to sit there and just take it,” she told WAPT. “When you admit you have a problem and you admit that it’s something that you need to get up and do something about, you can do it.”

Mississippi woman with will to survive to undergo new…