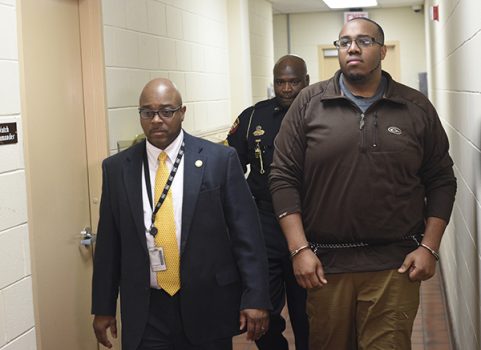 Vicksburg Police Lt. Johnnie Edwards and Sergeant Bobby Jones walk Marquise Holmes to the Municipal Court room for his initial appearance Tuesday. Holmes is charged with culpable manslaughter for involvement in a wreck which claimed the life of a woman and hospitalized another. (Courtland Wells/The Vicksburg Post)

A volunteer firefighter using a flashing red light to pull a car over occupied by two young women is accused of causing a fiery crash that killed one woman and injured another over the weekend.

Marquise Holmes, 25, was charged Tuesday with culpable negligence manslaughter and aggravated assault. He was being held on a $300,000 bond.

Both women were hospitalized. Stamps died Saturday, and Howard is recovering.

Vicksburg Police Lt. Johnnie Edwards says Holmes was driving behind the victim’s vehicle with his red lights on and attempting to pull her car over. Her car ran off the road, hit a tree and burst into flames.

“We’re still investigating, but we do have information to support the arrest,” Edwards said.

Howard remains hospitalized from her injuries in the wreck.

The Vicksburg Post and the Associate Press contributed to this article.