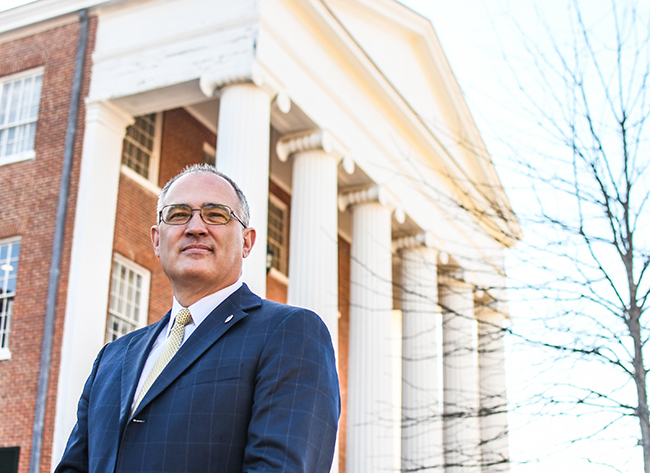 Larry Sparks, in Oxford, Miss. on Thursday, January 31, 2019, has been interim chancellor at the University of Mississippi since January 4. (Bruce Newman, Oxford Eagle)

It has been a busy three months for the University of Mississippi. On Nov. 9 Jeffrey Vitter announced his resignation as chancellor, ending his tenure that lasted a little over three years. The resignation took effect last month and on Jan. 4 Larry Sparks, Ole Miss’ Vice Chancellor for Administration and Finance, took over as the interim chancellor.

The first month on the job for Sparks has been about keeping the ship going in the right direction and getting acclimated to his new role on campus.

“I would say it’s been exciting,” Sparks said of the transition. “It’s been interesting. I am doing my best to be as proactive as possible in terms of meeting individuals, both internal and external, in answering questions in term of expectations because it is an interim period. We don’t want the institution to stand idle, if you will, during the period.”

In echoing that message, Sparks sent a letter out to Ole Miss faculty, staff and students on Jan. 22 as the spring semester was beginning. The letter reinforced his goal of wanting to ‘facilitate a smooth transition period’ until a new chancellor is appointed.

Mississippi Institutes of Higher Learning’s Board of Trustees will be in charge of finding a permanent chancellor for Ole Miss, but a specific timeline has not been given in regards to the hiring process. With uncertainty on how long Sparks will be serving in the interim, he is preparing himself for this to be a long-term situation.

“I’ve talked internally to our leadership team and to others who have asked, I said internally let’s plan on one year,” Sparks said of his tenure. “If it is a shorter or longer period than that then we’ll deal with that when it occurs.”

Sparks is focusing on the here and now and Ole Miss’ present issues at hand. Sitting at the top of that list is finding a way to get more students on campus. Enrollment numbers have dropped the past two years across the university’s regional campuses and the medical center in Jackson. In the fall of 2017 there were 23,870 students enrolled at the university. That number dropped to 23,528 in the fall of 2018, a 2.2 percent decrease. 2017’s decrease of 1.9 percent was the most in over two decades at Ole Miss.

One of Sparks’ main goals it boost in-state enrollment numbers. 58.3 percent of students enrolled at Ole Miss this school year (2018-19) are Mississippi residents. The rest are from all 50 states and there are 90 countries represented among the enrollment numbers.

Sparks also reiterated their intentions to continue to recruit outside of Mississippi and internationally. He is also ‘OK’ with the current enrollment ratio being near 60/40 in terms of in-state students to out of state students.

While sitting in the chancellor’s chair for potentially a full calendar year comes with keeping the relationship with the athletic side of the university healthy. Sparks has already met with leadership members in the athletic department. With athletics coming out from under the years-long cloud of an NCAA investigation and a new chancellor set to be in place, there is a feel of a clean slate for both the academic and athletic aspects of the university.

“One of the first points in my letter was that we’ll work together as team, as one community and that’s my intention going forward,” Sparks said. “That includes athletics. I would say we have a great working relationship and we speak frequently.”