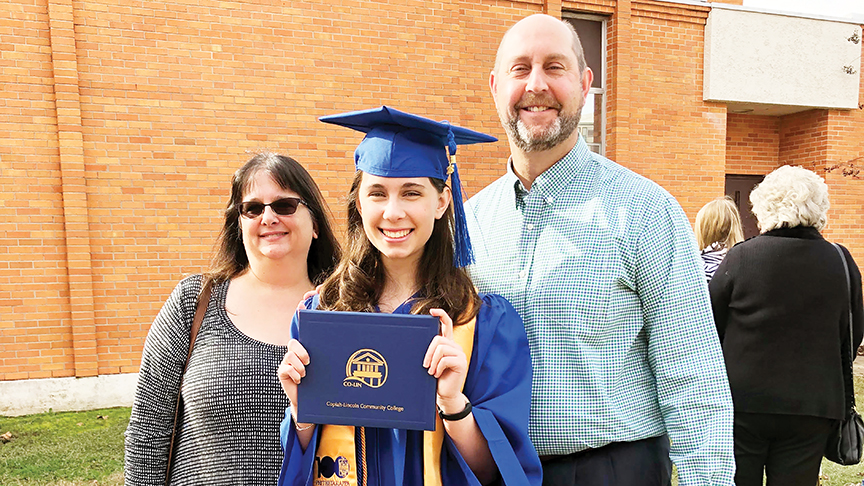 Photo submitted Amelia Grace Morehead of Wesson graduated at age 16 from Copiah-Lincoln Community College and will next attend Mississippi College. Pictured are, from left: her mother Beth Morehead, Amelia Grace and her father John Morehead.

Before Amelia Grace Morehead heads off to her junior year at Mississippi College, she needs to get her drivers license.

Amelia, who graduated from Copiah-Lincoln Community with an associates degree in December, is just 16.

She’ll turn 17 a week or so shy of her first day of class at the Clinton campus. Trading in her permit for a permanent license is on her list of things to do before the fall semester starts.

The daughter of John and Beth Morehead of Wesson, she’ll be commuting back and forth to school rather than stay in a dorm. That makes her mom feel better about sending her baby off to the university.

The Moreheads knew their youngest was gifted at an early age. As a military family on the move — John Morehead is retired Air Force — the one constant Beth Morehead could give her children was a classroom. So she home-schooled.

Abbey was 11 and Adam was 7 when Amelia was born. The baby started “school” at just a week old since their mother was the teacher.

Her brother swears she was born talking and when she was 2 years old, she’d “explain” to anyone who’d listen things she’d heard during her siblings’ class work — like how the metamorphosis of insects works.

Adam told his mother: “Mom, her big words scare me.”

By the time Amelia was 4, there wasn’t much she couldn’t read. She whizzed through books about big red dogs and magic school buses. She loved the character Amelia Bedelia, mostly because of her kinship with her name. She moved on to chapter books at 5 years old. A few years later she would be reading J.R.R. Tolkien and J.K. Rowling.

She finished kindergarten in less than six months and moved on to first grade quickly. She excelled at reading and English, Beth Morehead said. She was good at math but it wasn’t her favorite. She enjoyed history and did well in science because she could, not because she liked it.

She completed eighth- and nine-grade courses at age 10.

Amelia graduated from Bridgeway Academy Homeschool High School in June 2017 at 14 with a 4.21 GPA and 15 hours of dual enrollment from Co-Lin. In December, she became one of the youngest graduates in the community college’s history. She finished with highest honors as a Phi Theta Kappa member and a 2018 William Winter Student Scholar. She’s also a 2018 State Farm Foundation Scholarship winner.

Her parents just go with the flow and let her set her own pace.

“We never pushed her to go faster,” her mom said.

To balance it out, her parents kept her in age-appropriate social peer groups. She’s taken dance for years from Nena Smith and plays the piano for the praise band at Wesson Baptist Church.

Mississippi College wanted Amelia to start class in January, but the teenager had things to do — she had her wisdom teeth removed Thursday and there’s still that drivers license thing.

When she goes in the fall, she’ll be pursuing a degree in psychology with a minor in English literature.

She likes working with children and psychology fascinates her, so she wants to do something that will allow her to make a difference. She hasn’t chosen a career path though.

“I figure I’m young still. I have a little time to decide that,” she said.

Amelia completed most of her coursework at Co-Lin online, though she was on campus for Phi Theta Kappa meetings. This will be her first time to sit in a university classroom surrounded by students, the majority of which will not be in their teens.

That doesn’t worry her.

“I’m excited about going to classes with other people and exploring that medium of learning,” she said.

If all goes according to plan, Amelia will earn her bachelor’s degree at 18. She’s not sure if she’ll take a break and travel, head into a career or push ahead for a master’s.

She’s in no hurry to decide.

“We won’t really know until we get there,” she said.