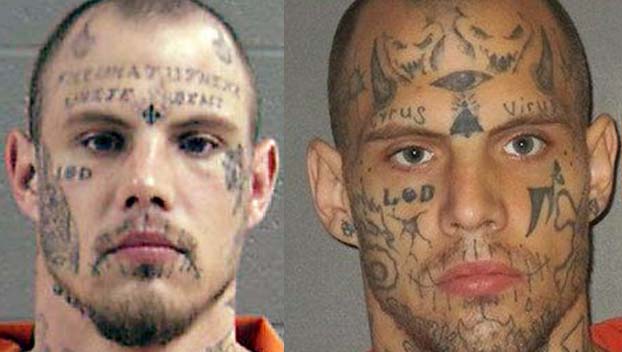 The heavily tattooed felon Mississippi authorities shot and killed this week after he pulled a gun while deputies tried to arrest him apparently has a twin brother, equally tattooed and and also in facing felony charges.

The Baton Rouge Advocate reports Lawrence Bottoms, who was shot and killed by Hancock County, Mississippi, deputies, has a twin brother, William Bottoms, who is scheduled to be tried this month in Baton Rouge on murder charges in connection with the deaths of two Louisiana men in 2017.

William Bottoms Jr., 29, is reported from Greenwell Springs, Louisiana. He is accused of shooting and killing Mohamed S. Hussain and Derrick Williams while the three men and a woman road in a car together between Baker and Zachary.

His late brother, Lawrence Bottoms, was being sought on a warrant for being a felony in possession of a weapon when he fled police and eventually brandished a firearm. Sheriff’s deputies shot and killed him on the spot.

Lawrence Bottoms pleaded guilty in 2017 to aggravated battery in the April 2015 stabbing of a teenager in the face with a screwdriver in Livingston Parish, Louisiana, court officials have said.

The teenager died months later. Lawrence Bottoms was arrested in August 2017 in Waveland, Mississippi, and charged with being a felon in possession of a gun. Bottoms also was convicted of second-degree battery and simple robbery in Louisiana in March 2009, news outlets have reported.