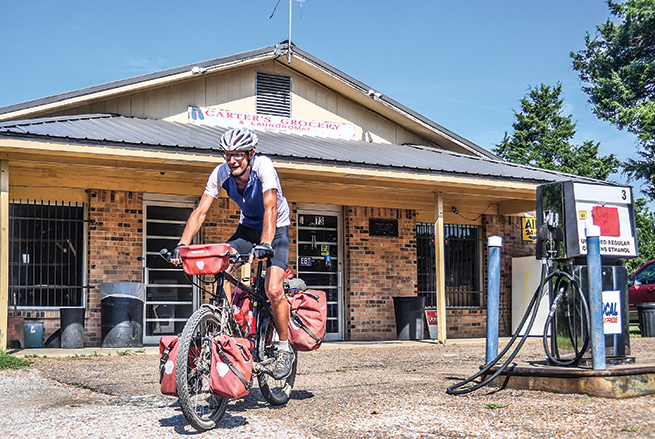 Andy Hemmins leaves Carter's Grocery after taking a break as he rides the final miles of his more than 2,000 mile solo bike trip trip in Taylor, Miss. on Tuesday, July 9, 2019. (Bruce Newman, Oxford Eagle via AP)

Andy Hemmins can be seen riding his bike around Oxford, but he used to spend his time riding much further distances. While facing what he would describe as a “mid-life crisis,” Hemmins decided to scratch an itch he had for quite some time.

After nearly three years of planning, Hemmins set out on month-long solo bike tour that stretched over 2,300 miles and reached as far west as Texas. Before turning back, he got as close as 130 miles to New Mexico. The original route had him going as far as Colorado, but would require much longer than the one month Hemmins was able to acquire to miss work.

“I thought I better see if I can do that stuff again and hopefully for the next 15-20 years,” Hemmins said. “I went down my driveway, through the Square and across the Mississippi River on the Greenville bridge.”

Cycling is a passion and a hobby for Hemmins, who is originally from Oxford, England. He picked up the sport after buying a bike from his college roommate. During a four-month ride from San Francisco to New York in 1996, Hemmins made a stop in Oxford, more specifically Square Books, to pick up a map of Alabama. It was in Square Books he met a woman who is now his wife. After a longer-than-planned stay in Oxford, Hemmins eventually moved and has called Oxford home for 23 years. He works in the IT department at the University of Mississippi.

Prior to last month’s trip, it had been 19 years since he had gone on a bike tour. He and his wife went on a 10-day ride in 2000, but since then, most of his rides have stayed fairly local and close to Oxford. Once he left his driveway, the 51-year-old said he still had doubts that he had the ability to complete this idea of his.

“It was a relief that I found myself able to still physically and mentally capable of doing such a thing,” Hemmins said. “I’d been thinking about it everyday for three years. … It was certainly a mental and physical challenge, which I knew it would be. That was what I wanted. When I rode off down the driveway I was not a hundred percent certain I could do what I was setting out to do.”

After a few days into his trip, Hemmins said he had a moment where he knew he was going to be OK and the aspect of stress went away.

Having three years of dreaming and planning, Hemmins had his entire route mapped out uploaded on his phone. He did not ride on heavily populated roads, but instead took more of an “off the beaten path” approach. At night, he would find a secluded spot, or as secluded as possible, to camp and rest. Sometimes a stay in a national park took place if Hemmins was close enough to one. There were only a couple instances where he was discovered while camping, but each of them ended without issue.

With only his bike and essential equipment, Hemmins left his driveway full of doubt, but he returned a month later with the confidence he was searching for fully instilled. Having the knowledge that he can still complete long-distance rides, Hemmins said he has plans to ride up the East Coast to visit family in Vermont in the future. Other itineraries involve much farther destinations.

“I definitely have daydreams of going to South America, especially Bolivia where there is a road called ‘The Road of Death’,” Hemmins said with a smile. “There are some 5,000-meter mountain passes across the Andes (Mountains) that I would love to do, but those are more daydreams. Riding to Vermont is definitely more realistic.”