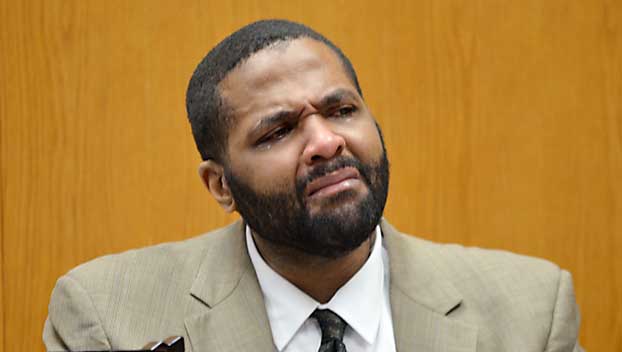 Cory Godbolt cried during Shayla Edwards’ testimony Wednesday on Day 5 of the capital murder trial of Cory Godbolt at the Pike County Courthouse in Magnolia. Edwards’ 11-year-old son is one of eight people Godbolt is accused of killing May 27-28 in 2017. (Photo by Donna Campbell/The Daily Leader)

A week before Cory Godbolt allegedly took the life of 11-year-old Austin Edwards, he taught the boy how to breathe.

That was the testimony of Austin’s mother, Shayla Edwards, on Day 5 of the Godbolt’s capital murder trial.

Edwards lost her son as well as her nephew, 18-year-old Jordan Blackwell, in the early morning hours of May 28, 2017.

On the stand Wednesday, she told Assistant District Attorney Rodney Tidwell that a week before the murder, Austin excitedly shared with her that he and Godbolt, a family friend and relative by marriage to her sister, Tiffany Blackwell, had gone jogging with the defendant in Godbolt’s Bogue Chitto neighborhood down the street from his church.

“Mama, I learned how to breathe when you’re running,” she said he told her.

Days later, she’d hold his lifeless body to her chest and kiss him, rocking him and begging him to wake up.

She began to cry when shown the crime scene photos of her sister’s living room that also showed her son’s and nephew’s bodies.

“I ran over to Austin and I held him and I cried out to God and I told him I love him and I kissed and rocked him,” she said.

Tiffany Blackwell was doing the same a few feet away with her son, she said.

Godbolt’s face was wet with tears and he shook his head listening to her.

Defense attorney Katherine Poor comforted him with her hand on his shoulder while Edwards’ talked about how Godbolt had been a part of their lives for decades and was a part of their church family.

Blackwell followed her sister on the stand, recounting a similar version of the night they left her home on Coopertown Road to go to Lee Drive after Sheena Godbolt (now May) called her for help after Lincoln County Sheriff’s deputy William Durr, her mother Barbara Mitchell, her sister Toccara May and her aunt Brenda May were shot multiple times and killed.

They left at least one adult cousin with the teenagers and young children who were playing cards and basketball video games at the Blackwell home and went to Lee Drive.

“We told them to lock the door,” Blackwell said.

She called Jordan and told him about the shootings. He was at McDonald’s but was headed home to be with his younger cousins and friends, she said.

When she was also shown the photo of her son and nephew at the crime scene, she broke down crying.

After a few minutes trying to talk, Circuit Judge David Strong allowed her to step outside into the hallway to regain composure.

She could be heard sobbing behind the door for a several minutes before she came back in to finish her testimony.

Lincoln County Sheriff’s Deputy Chief Johnny “Scooby” Hall was in Tickfaw, Louisiana, when he was notified a deputy was down on Lee Drive.

As he drove to Bogue Chitto to his home to get his unit — he lives two miles from the first crime scene — he got a call from Shelly Godbolt Porter, the defendant’s sister, who was hysterical, he said.

She told him Godbolt had killed a deputy.

She called again as he approached the Delaware Avenue exit of McComb and put him through to Godbolt on a three-way conversation.

Hall, Godbolt’s cousin and a groomsman at his wedding, said he believed Godbolt was still in the house at Lee Drive based on information from dispatchers and other callers.

Godbolt told him, “They’re going to kill me, cuz.”

“He told me he was not coming out of the house,” Hall said.

Hall, who attended church with Jordan Blackwell and Austin Edwards and their families, broke down in tears talking about the boys.

Others who testified Wednesday included Caleb Edwards, Kyler Patton and Xavier Lilly, who were at the Blackwell home the night of May 27, 2017. All three are around 17 and 18 years old now.

Edwards said his cousin, Jordan Blackwell, got on top of him to shield him. Lilly, who had pulled Austin Edwards behind the couch with him when Godbolt shot his way in through the locked front door, tried to give Godbolt his car keys when he asked for them.

As he talked to him, Austin ran out from behind the couch toward them and Godbolt shot him, Lilly said.

He then shot Jordan Blackwell, who was on top of Edwards to shield him.

Lilly recounted the hours he drove Godbolt around Lincoln and Pike counties, stopping at the Walmart gas station in McComb and going to Godbolt’s home on Brister Street for a few minutes.

“He had the gun pointed at me the whole time we were riding,” he said.

Godbolt eventually had him drive to the East Lincoln Road home of Ferral and Sheila Burage in the near dawn hours of May 28, 2017.

“He said, ‘When I get out, just back up and drive off,’” Lilly testified.

Godbolt was arrested that morning at Super Jack’s near the home after allegedly shooting the Burages to death.

Testimony in the capital murder trial is expected to continue into next week. A DeSoto County jury is hearing the case.