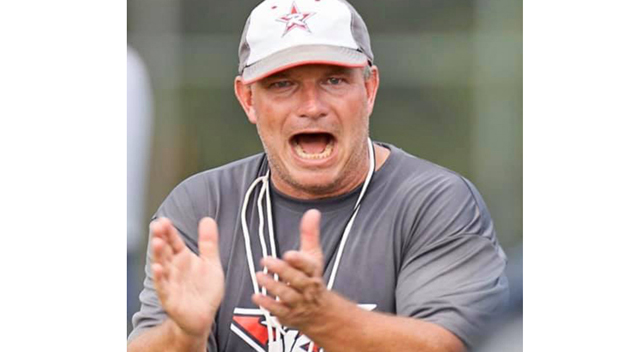 Richland High School football coach J.J. Plummer encourages his team during a practice. Plummer, who coached at Porter’s Chapel Academy from 1997-98, was diagnosed with coronavirus late last week and spent two days in the hospital in Jackson. He was released on Sunday and is recovering at his home in Brandon. (Photo courtest of J.J. Plummer)

Like most Americans, J.J. Plummer was at home watching the news and its abundance of stories about the spread of the COVID-19 coronavirus.

Not long after, he became one of those stories.

The Richland High School football coach is one of 758 people in Mississippi who have been diagnosed with COVID-19. He spent two days in the hospital at St. Dominic’s in Jackson before returning to his home in Brandon on Sunday. He’ll spend the next two weeks in quarantine there resting, taking the drug hydroxychloroquine, and monitoring his breathing as he recuperates.

The 47-year-old Plummer was the head football coach at Porter’s Chapel Academy in Vicksburg for two seasons in 1997 and 1998. He has also coached at St. Andrew’s, Terry, Lamar Academy, North Pontotoc and Mississippi State during a 25-year career.

“You’re sitting there watching the news, and you see that Mississippi has, like, four cases and then the next day it’s eight and the next day it’s like 12. Then all of a sudden you get a call and you’re positive. I’m like, ‘Am I really one of the 13 people so far?’ It just hits you real quick,” Plummer said in a telephone interview on Sunday afternoon.

Plummer suspects that he was infected with COVID-19 at a carnival fundraiser for Richland’s football team about three weeks ago. It took about another week for the first symptoms to start showing up, in the form of painful headaches.

“For five straight days it felt like I had a migraine in my eyes. I thought it was just from the pollen. Then, on about the sixth day, my whole body — especially my legs and hips — was just in massive pain,” he said.

Plummer thought it was the flu, and went to the doctor. He tested positive for a virus, but not the flu, but it was not initially thought that he had coronavirus because there was no fever present. That changed overnight, and a “horrible” cough also developed. The next day he was tested for coronavirus in his doctor’s parking lot.

“He put the sticks up my nostrils and told me to go back home and wait for four days,” Plummer said. “He called me Friday morning and told me that I was positive for the virus and since I’d had it for so many days I needed to go to the hospital to make sure it hadn’t turned into anything.”

The second test came back positive for coronavirus, and Plummer was admitted to St. Dominic’s on Friday. At first he was going to be quarantined, but chest X-rays showed he also had pneumonia.

“I was hoping to just go home, but they did a chest X-ray and found pneumonia and said get ready to stay a while,” Plummer said. “Everybody talks about how this thing is not as dangerous as the flu. I’ve had the flu. This is beyond anything I’ve ever felt in my life. It almost feels like a slow death.”

As he battled the virus, Plummer said he did have a moment where he felt close to death. A patient in a nearby room died — it’s not known from what — and Plummer heard a preacher conducting a service.

“When I heard that, it scared the fire out of me because I thought, ‘I’m next,’” Plummer said. “I’m not sure what all went on with that, but it sure did sound not very good. It scared me terribly. This whole thing is a nightmare.”

Plummer was hospitalized Friday and Saturday, and released Sunday when his pneumonia improved. He will remain quarantined at home for the next two weeks, and said he is about halfway through the disease’s progression.

“This is Day 11 or 12 that I’ve had it. The doctor told me this could go on for about 20 days, and just to ride the course,” Plummer said. “I’m taking the hydroxychloroquine. It seems to be helping me a lot. My pain has gone away a lot. My cough seems to have gotten worse, but they told me to expect that.”

While he deals with the next phase of his recovery, Plummer will also deal with isolation. He lives by himself in Brandon and will be alone while quarantined. He has talked with his daughter and son — the latter of whom is in military boot camp in South Carolina — as well as his parents in Winona.

In addition to his immediate family, Plummer said he has been overwhelmed by the number of friends, coaches and former players who reached out to him through social media over the weekend as word of his condition spread. Most of his current players have also called or messaged him.

“Social media has been a blessing to me. It feels like I have 10,000 friends right now,” Plummer said. “Some people may have their feelings hurt because I haven’t been able to reach out to them yet, but there’s been a huge overwhelming response. I can’t tell you how many football coaches reached out to me. The state of Mississippi has rallied around me.”

Richland went 4-7 in 2019, its first season with Plummer as the head coach. That was the program’s highest win total since 2013, and a four-game improvement after a winless 2018 campaign.

High school sports have been suspended in Mississippi until at least mid-April because of the coronavirus outbreak, and spring football has been canceled. There has been talk that the 2020 season might be in jeopardy. Plummer is hopeful that doesn’t happen — not just because he’s eager for Richland to take a step forward, but for the sense of normalcy that sports provides.

At the same time, he admits that preparing for a football season is a weird thing to think about while he and more than 122,000 other Americans are infected with COVID-19 and 2,112 have died from the disease as of Sunday.

“It’s an absolutely weird thing. As crazy as it sounds, and as valuable as life is, football sure means a lot in life. I think everybody is yearning to have a football season. There’s an awfully big, scared nation right now that there’s a possibility we might skip the football season,” Plummer said. “It would certainly feel like a sense of normalcy to me, because my family is the most important thing in my life and then after that football has always played a huge role in my life. It sure would seem like a huge sense of normalcy to get back to that. Right now, I guess there’s a lot of doubt in that.”

On a personal as well as professional level, Plummer added, having a football season to look forward to is important. He said it will give him a goal to work toward as he continues his recovery.

“If anything, as long as I can survive this and get through this, it’s just going to make me work that much harder and stronger to get to where we need to be. I’ve never had a setback really hit me like this thing has. It certainly tells and shows you to never take anything for granted,” he said. “I’m glad to share my story. It is embarrassing for people to know that you’re coronavirus positive. I just hope here in a couple of weeks that I can finally get around people and be normal again.”