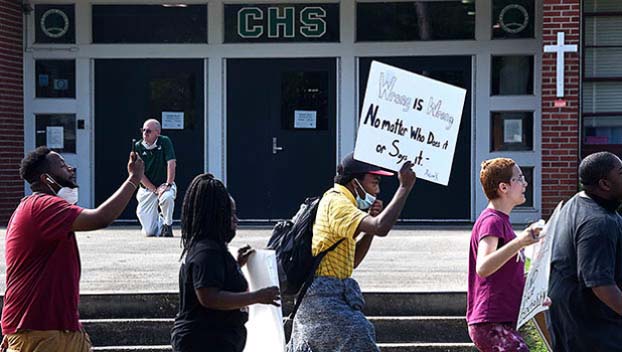 Look at the photo above. It’s the epitome of how a good, Christian responds to other children of God who are hurting, with reverence and compassion.

The image was taken this week in Natchez, Mississippi, as a group of residents led a protest aimed at drawing attention to police brutality in the wake of the death of George Floyd, the Minnesota man who died recently in police custody as an officer held a knee to Floyd’s neck.

As the protesters passed Cathedral High School, the school’s principal walked outside and quietly kneeled down out of respect. He was alone at the front of the school, but his presence spoke volumes.

One protester who saw his gesture said she was moved to tears by the act.

He didn’t have to do it. His white privilege could have given him the ability to casually look the other way.

He could have stayed inside the school building and either ignored the passing protesters or he could have just hidden inside. He didn’t. The principal walked outside and made a bold statement, a public statement.

Across America, lots of people who call themselves Christians have reacted to Floyd’s death in far less respectful manners, and a number are doing like the principal and like Christ and respecting and loving all of God’s children.

As part of the family of God, when one of us hurts, all of us are supposed to be hurting too.
All too often, we simply look away, our hearts hardened.

This man represents the heart of many, many people in Mississippi, and we thank him for reminding us that good people, good caring, loving people are still out there.

On the night Tate Reeves won the 2019 governor’s race, most of the state’s top Republican elected officials stood to... read more