Billions will flow to Mississippi from Rescue Act. Where will it go? 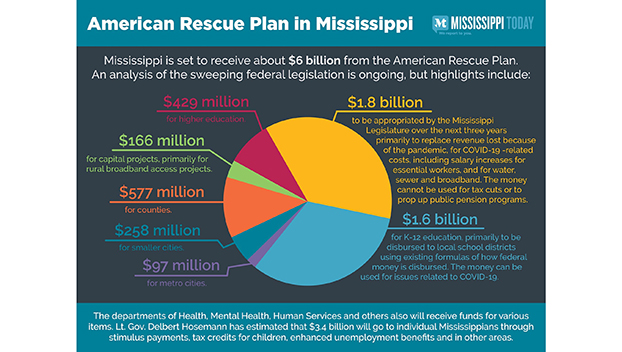 By Geoff Pender and Bobby Harrison

Mississippi will receive about $6 billion from the federal American Rescue Act — an amount equal to the entire annual state general budget, and an amount state leaders say could change Mississippi for the better if spent wisely by state and local governments and bureaucrats.

“Clearly this is something that is transformative to Mississippi,” Hosemann said, saying state leaders are trying to get a grip on exactly how much money is coming to the Magnolia State and the rules for spending it. “… It is a good problem to have. Part of our process in my own mind is not only using this over the three years, but how to make this have an effect over the next five, 10 years or longer.”

While state and local leaders are still trying to suss some particulars on what money is going where, the money includes:

Millions more will go directly to state agencies such as the Departments of Health, Mental Health and Human Services — with state leaders still working to learn those amounts and details. Hosemann said an estimated $3.4 billion will go to individual Mississippians through stimulus payments, tax credits for children, enhanced unemployment other benefits.

Half the money is expected to arrive by the middle of May, with the other half coming within a year later. Governments have until 2024 to spend it.

Unlike past federal COVID-19 relief or stimulus funding, the money coming to states from the $1.9 trillion act passed by Congress has relatively few strings attached or directives on how it’s spent and a much longer, three-year deadline to spend it. And some of the money is earmarked directly to cities, counties and even state agencies and institutions.

“That’s probably one of the best provisions I’ve seen in a relief package in quite some time — going directly to the counties and cities to be put to work right away instead of any federal or state bureaucracy calling all the shots,” said Gulfport Mayor Billy Hewes, president of the Mississippi Municipal League. His city, the second-largest in the state with a population of about 72,000, is set to receive about $18 million from the plan.

The federal law says local governments can spend the money on water, sewerage and internet infrastructure, but the U.S. Department of Treasury appears to have large discretion over the spending, and Gov. Tate Reeves and other state officials say they are working to get more specifics.

Jackson Mayor Chokwe Antar Lumumba did not respond to request for comment on the Rescue Act money. Hewes and other local leaders said cities and counties across the state have great infrastructure and other needs, and “we are going to do our best to apply it effectively.”

Hewes said the law does not appear to allow local governments to use the money for road infrastructure, something he hopes gets “fixed” by the treasury. He said other federal and state dollars — including in this package and in the last round of COVID-19 relief — have been allocated to broadband internet access, and many cities have greater needs for road work.

State employees, higher ed employees to receive pay raises as lawmakers finalize budget
“Quite frankly, we are perplexed that roads and streets were left out of that allowance for how it can be spent,” Hewes said. “As president of the municipal league, and hearing from mayors across the country, there is a universal appeal that the treasury expand that definition of infrastructure to include roads, and we are all at a loss why that is not in the act.”

‘Pot of gold for cities’

Many mayors and county leaders this week were trying to glean more info, and in particular confirm how much their governments will receive.

Greenwood, a city of about 15,000, is set to receive about $3 million. Mayor Carolyn McAdams said that’s the number she’s heard and, “I’m hoping that’s the pot of gold we’re getting.”

“We’re still waiting to hear all the stipulations,” McAdams said. She said she would like to be able to use some of the money to provide “an across the board raise” for city employees who have had to “work doubly hard during the pandemic.” She said she understands this may not be allowable for the money and that it’s “one-time” money perhaps better suited to projects than recurring expenses.

“Trust me, in cities and towns, there are lots of ways to use that money, no shortage of needs,” McAdams said. “Right now we are in the middle of repaving streets. It would be nice to do a few more, add more sidewalks. We need improvements to our wastewater treatment plant — we have lots of old infrastructure … our ballparks need work on them … This money will be very usable.”

Vicksburg Mayor George Flaggs said the Rescue Act money for local governments “is great news … and it couldn’t have come at a better time.” His city is expected to receive $4.88 million.

“From what I understand there might not be too many restrictions on it, other than it can’t be used to replace money cut out of a budget,” Flaggs said. “We’ll see … they may change some things, and we’re waiting to see all the stipulations.

“I’ve told my board, we need to only spend this on one-time expenditures,” Flaggs said. “I’m a conservative and I believe spend one-time money on one-time expenses, so you don’t inflate your budget. Things like infrastructure, or buying items like police cameras we’ve been trying to get. I hope we can use it on marketing, tourism.”

Flaggs said he’s pleased with the amount allocated to his city, adding, “they didn’t have to give us anything.” He said he’s unsure what calculus was used because he saw some cities larger than his receive less money.

Harrison County Supervisor Connie Rockco, whose county is set to receive more than $40 million, said her county’s leaders have not discussed the money and are awaiting more details.

“They haven’t even said the check’s in the mail yet, so there’s a hesitancy for us to get overexcited,” Rockco said. She said that, personally, she’d like to find ways to directly help small businesses in the county that have been hurt by the pandemic.

“Mental health, children’s services — there are many needs out there, many things that have been neglected by society as a whole,” Rockco said. “In our county, we also have an extreme need for fire services, because our county is growing so quickly, bursting at the seams. We have all sorts of needs, but we will have to see how it can be used.”

In Congress there was intense partisan debate over the Rescue Act pushed by Democratic President Joe Biden, and it passed along party lines.

Republican Hewes, a longtime former state lawmaker and former candidate for lieutenant governor, said that, as a mayor, he’s not focused on the broader politics of the act.

“Going from the state level of government to the local level, you take a large leap from the philosophical or theoretical to more pragmatic,” Hewes said. “A road we need to pave in the city is not a red road or a blue road. It’s a blacktop, and I need green to fix it, that’s what it comes down to.

“We as local leaders gave (Congress) some input through many of our associations and our delegations, and this is what came out of the machine,” Hewes said. “Rather than editorialize, I think folks on the local level just want to use what’s provided to us as best we can. There is an opportunity here to make a substantial impact, not unique to Gulfport or to Mississippi, but universally across the country.”

This story is republished with permission by Mississippi Today. Click here for link to original story.