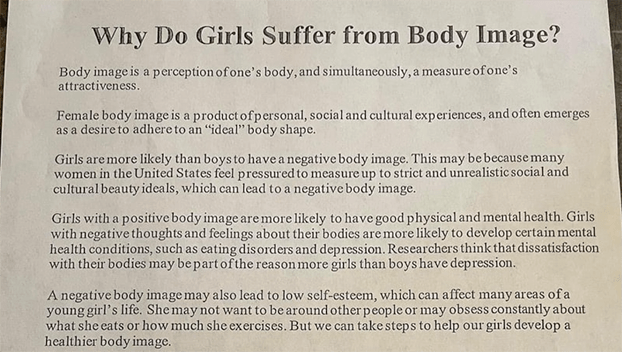 A Mississippi middle school has been forced to backtrack on a policy that offered female students shapewear to help address “body image” concerns.

A parent’s concerns about Southaven Middle School’s policy went viral on Facebook and Twitter after the parent posted a copy of a letter that she received from the school.

“This is what was sent home with my 8th-grade daughter,” wrote Ashley Heun when she posted an image of the letter. Heun’s daughter Caroline attends the school in north Mississippi.

This is what was sent home with my 8th grade daughter at Southaven Middle School. All girls were sent home with this letter. I’m appalled at the fact that they are trying to fix “negative body image” by sending home SHAPEWEAR! @cory_uselton @TweetDCS @DCSeNews @SouthavenMiddle pic.twitter.com/tmluXTW990

The letter from Southaven Middle School titled “Why Do Girls Suffer from Body Image?” discussed body images issues among females and at the bottom offered parents the option to consent to their daughters receiving literature and “shapewear, bras and other health products if applicable.”

“We, the counselors of Southaven Middle School, would like to have an opportunity to offer some healthy literature to your daughter on maintain positive body image,” the letter says.

The memo suggests that “girls are more likely than boys to have a negative body image” due to “unrealistic social and cultural beauty ideals.” which can result in higher instances of depression and low self-esteem among school girls.

The letter didn’t sit well with Heun, who felt the need to make her opinion known on social media.

When she addressed her concerns to the school, Heun said that Southaven Principal John Sartain was apologetic. Heun told CNN that Sartain said the counselors wrote the note with good intentions and that the program had since been canceled.

The Desoto School District made the following statement about the incident:

“District officials have been made aware of the parental permission form sent to parents by Southaven Middle School. While school officials have provided insight into their positive intentions, the district also understands how this type of information causes serious concern from parents. Southaven Middle School has since discontinued the implementation of the program.”