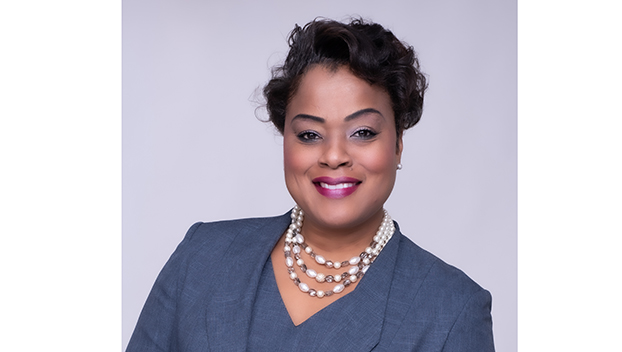 Growing up in Prairie the baby of nine children, Cashenna Cross has lived out a life full of accomplishments through local schools to the North Atlantic Treaty Organization (NATO) by way of the U.S. Air Force.

Last August, she began her next turnkey moment in life by being elected mayor of Glenarden, Maryland, which is part of metropolitan Washington, D.C. Even though it’s a far cry from a simple life growing up in the country, she harps on the support and influence growing up in Prairie and Aberdeen had on her life.

“All things work together. If you stop putting labels on things, you’re already walking a purpose. For me becoming mayor, I have been walking in that purpose from a little bitty child – serving, delivering, assessing, stepping outside of the box, taking a hit but not letting that destroy me. You need all of that to run a city,” Cross said.

The 1992 Aberdeen High School graduate was a member of the Hall of Fame, president of the student body, Miss AHS and lettered in sports.

She said singing in the church choir at Mt. Nebo M.B. Church, being a member of groups such as the Girl Scouts, 4-H and Girls State helped reinforce her drive to be a community leader and set a path towards her goals, which included being an attorney and seeing the world.

“I’ve always approached every opportunity with an expectation, always expecting it to be good,” she said. “For me growing up, that’s kind of where I lived.

“When I came through Monroe County, that’s what was imparted in me – always believe in yourself and believe in the possibility that you could be, and that’s the driving force that fueled me and that came from my parents.”

While a student, she said the community rallied behind the youth and invested in children, which also helped her future ambitions.

Following high school graduation, she attended Itawamba Community College and was the president of the student body and the school’s second Black homecoming queen in a unified election.

After transferring to Mississippi State University, she joined the modeling squad and ultimately the Air Force ROTC, choosing to challenge herself by applying to be an intelligence officer.

The experience laid the foundation to fulfill her goal of seeing the world.

BUILDING ON A SENSE OF SERVITUDE

After enlisting in the Air Force, Cross interviewed for the Judge Advocates General’s Corps but was rejected, which was a crushing moment since it aligned with her goal in law. However, she believes in timing.

Pursuing intelligence school, she graduated top of her class and soon began understanding the endless possibilities of a whole new world through the Air Force.

She served in the military from 1998 to 2018, and one of the many lasting memories was being selected as a vocalist for the branch’s Tops in Blue touring ensemble.

“It gave me another aspect where Prairie set the stage. I grew up in a church where we sang loud and proud and marched in in a row. When I talk about energy and driving force, Tops in Blue is another humbling experience. It’s all humanitarian support. We go where the troops are – from the lowest depths where you only have an outpost to big cities where several thousands of troops are there. We went because we brought that energy, that piece of America to them,” Cross said.

She was part of a 118-show tour and was in Spain at the time of the Sept. 11 terrorist attacks.

“That was the moment that made us understand how vulnerable life really was and how much more we were going to have to be, as a country, to become better planners and innovative in our technology,” she said. “That was the moment in the Air Force that told me I was going to do 20 years.”

The Air Force’s core values rang out even more true following the attacks, which she continued to use throughout life.

A few of her other roles in the Air Force included deployments; being the Pacific Command’s lead planner; and being a staff briefer, which led to devising studies at the congressional level to the Senate Armed Services Committee.

That accolade led to her fascination with politics.

During a deployment to Iraqi, she was part of a team that trained Iraqis to be more independent for their services.

“I became the first woman in the Iraqi defense force to see the federal police graduate their first set of women graduates. I’m sitting next to (Afghanistan) President (Hamid) Karzai, the defense secretary of Iraq and all the dignitaries that came in from Iraq and Afghanistan to build this unity partnership. I’m the only one of my kind – a Black female from America and I’m wearing my rank of major. The women were so proud to see a Black female officer,” Cross said.

Even though she faced her highs, she hit a low by facing prejudice by being told by a superior while at Air Command and Staff College in Alabama she had gone as far as she would go under his leadership.

“I asked him what that meant and he said, ‘Well, do you know where you are?’ and told me to my face, ‘You’re in the south now.’ I looked him in the eye and said, ‘I’ll beoff your team in 72 hours.’ You wouldn’t imagine how that felt. I’m in the prime of my life. I’m number one in a class of 191, and it doesn’t make my performance promotion recommendation form,” Cross said, adding she had risen in rank to deputy course director and wrote the curriculum for one of the courses at the time.

She said members of a review board said she was intentionally being sabotaged, which made her question if it was the right time to end her military service.

However, one opportunity led to another, including serving as NATO intelligence systems chief, which led to the organization’s first iteration for cyber joint intelligence, surveillance and reconnaissance. For that effort, Cross received an award from the chief of staff from the supreme headquarters with accommodations.

“I was the youngest person there, the only major among colonels that did this in the spring of 2015 that was awarded with this highest honor. They gave me the top one percent of all of NATO,” she said.

Her military career ultimately led to relocation to the Washington, D.C. area, setting the stage for her post-military career with the National Security Agency as a project director and her role as mayor.

ANSWERING HER NEXT CALLING

In January 2021, Cross felt called to run for mayor. She already served as deputy of the city’s ethics commission at the time. Last year, she was elected as the city’s 18th mayor in its 82-year history.

She said the odds were stacked against her during the campaign.

“If you’re not from Glenarden, don’t expect to win Glenarden. If you’re not from around these parts, you’re a foreigner here. For me to take Glenarden as a first-timer, I was here only from 2016. To take Glenarden in just about four and a half years is unheard of. Everyone that was in office ever was born here or arrived here at a young age. They were groomed for these positions. For the little girl from Prairie, Mississippi out of Aberdeen, Monroe County to come in and take the top seat of this seat – that is the mountain top,” Cross said.

She said the city has produced U.S. senators and congressmen.

“I’ve always taken Monroe County with me. This journey I’m on is one of service. It’s one of dedication, raw commitment and energy,” Cross said.

While, as mayor, she is pushing the city’s mission, “A City on the Move,” the future and next phase of her life is unknown. However, she still has a dream to be an attorney, if nothing else, to have it on paper.