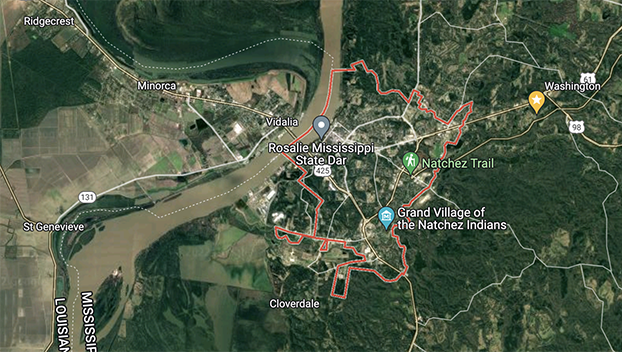 The majority of the city’s Board of Aldermen Friday voted to approve a study to determine the feasibility of annexing into the city the Broadmoor and LaGrange areas of the county north of Natchez and the area through Beau Pre subdivision in the county south of the city.

Former mayors Tony Byrne and Philip West, representing all seven living former Natchez mayors, attended a city meeting and suggested to the mayor and aldermen that the time is right to increase the geographic size of the city.

“The population of Natchez has deteriorated from its high in 1960 of 23,792 to an estimated population in 2021 of 14,178. Natchez is now the 29th largest city in Mississippi,” Byrne told the aldermen on Jan. 25. “Since 2000, we’ve lost 20.4 percent of the population. Ninety-eight percent of the cities our size in the United States have grown. We have not grown. If you don’t grow, you die.”

Byrne acknowledged a number of residents in the county would not want to be annexed into the city.

“But they use our facilities and I think they need to be to be a part of Natchez,” he said at the Jan. 25 meeting.

“To me, it is imperative we get this done. It’s planning for the future of Natchez,” Frazier said.

Gibson said feedback he has received since the mayors made the annexation suggestion on Jan. 25 has been negative.

“I have received not one positive for annexation,” he said. “I have been mayor for a year and a half and we have faced many challenges with our budget. We need to make sure we can provide services to our existing citizens.”

Alderwoman Valencia Hall made a motion to table Frazier’s motion for the annexation study, but it died for lack of a second. Alderwoman Sarah Carter Smith, who typically votes in concert with Hall, was attending the meeting virtually via telephone and Internet, but lost her connection to the meeting.

When Smith’s connection was back up, Hall made her motion again and Smith seconded it. However, Aldermen Frazier, Ben Davis, Dan Dillard and Alderwoman Felicia Bridgewater-Irving voted against it and it failed.

Alderman Dan Dillard argued that Frazier’s motion simply called for a study on the feasibility of annexation.

“We extend our fire protection to the entire county of Adams and receive less than $700,000 a year from the county for that. At some point, the services we are providing to our citizens will be diminished because of that,” Dillard said.

Frazier’s motion for a study was approved by a vote of four to two, with Hall and Smith voting nay.

Mississippi man arrested after leading troopers on high-speed chase that ends with crash into van, 18-wheelers