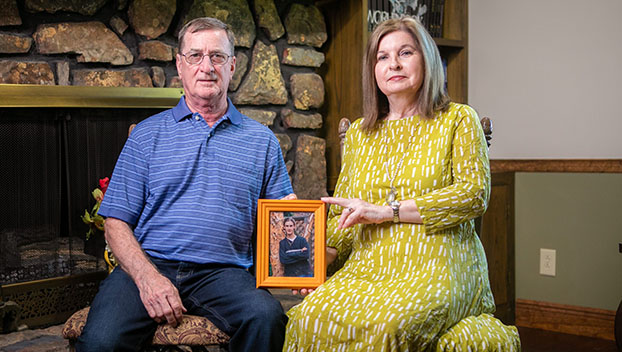 Brad Sellers celebrated his 40th birthday in the local jail in Quitman, Mississippi.

He’ll probably be there for his 41st birthday as well.

He has been in the Clarke County Jail since June of last year, charged with aggravated assault on a local police officer.

A psychiatrist he saw in December determined Sellers is incompetent to stand trial because of his schizophrenia but that he could be restored to competency with treatment. His mother, Dianne Sellers, said she was told her son faces a wait in jail of up to a year for a bed to open up at Mississippi State Hospital.

He is among an unknown number of Mississippians awaiting a bed in the hospital’s forensic unit.

MCIR’s recent story on Raffell Franklin of Laurel, who had been held five years in the Jasper County Jail without trial on a murder charge, sparked calls from civil rights groups and Franklin’s family to Disability Rights Mississippi, a nonprofit with a federal mandate to protect and advocate for the rights of individuals with disabilities across the state. They want DRM to investigate the process the Mississippi Department of Mental Health uses to determine how long those held in county and city jails across the state who suffer from mental illness have to wait for beds.

Following MCIR’s story, Franklin, who is now represented by DRM, was transferred to Mississippi State Hospital in Whitfield within 48 hours of DRM asking for information on his case, said Greta Martin, litigation director for DRM.

DRM, while investigating complaints of systemic understaffing at Mississippi’s state hospitals for the mentally ill, had already filed a lawsuit against the Department of Mental Health to obtain 30 days of incident reports, Martin said.

Responding to calls about Franklin’s case, the organization also requested information on how the department determines who goes to Mississippi State Hospital’s forensic unit from jails across the state — a request the department denied. So DRM filed another suit against the department for refusing to answer its questions. The department has declined to comment about its decision.

Having that information “will help us keep this situation from happening again,” Martin said. “We think it’s going to be telling and show how they are bumbling this.”

Martin said DRM requests information regularly from the department to monitor care, services, grants and facilities as well as information they need to investigate issues that need monitoring.

Generally speaking, Adam Moore, communications director for Department of Mental Health, said, “individuals who are awaiting admission in a jail are much higher priority for admission than the individuals awaiting treatment who are out on bond.”

“The charges themselves are not a factor in admissions. Infrequently, MSH receives information that a particular individual awaiting admission in a jail has a more severe psychiatric or medical situation than usual, and that is taken into consideration when prioritizing admission,” Moore said.

Moore also noted the wait is longer now than usual because the hospital can only staff 39 forensic beds. “These beds encompass pre-trial evaluation for competency, competency restoration treatment, high-risk patients under civil commitment, and individuals found not guilty by reason of insanity,” Moore said.

“Staffing has been a particular challenge during the ongoing COVID-19 pandemic,” he said. The goal is to reach pre-pandemic staffing levels.

“If the hospital were fully staffed and the environmental issues were addressed in the currently occupied buildings, 57 forensic beds would be available,” Moore pointed out.

The renovation work is expected to last through the second quarter of calendar year 2023, although the COVID-19 pandemic could affect the time frame, he said.

The department’s proposed renovation project for its forensic building would increase that capacity to 83 beds. “We anticipate a significant reduction in wait times and improved access to care for individuals awaiting treatment for competence restoration in Mississippi jails,” Moore said.

‘Just a sad situation how it all turned out’

In Brad Sellers’ case, his journey through the Mississippi mental illness facilities has included stops at Clearview in Moselle, Pine Grove in Hattiesburg, East Mississippi State Hospital in Meridian on two occasions, once for three months at thee State Hospital in Whitefield, once in Westhaven Group Home in Jackson, along with a stint for a probation violation at Mississippi State Penitentiary in Parchman, Dianne Sellers said.

He’s lived various times at home, where most recently, he was treated by Weems Mental Helath Center, who sent someone out to give him a shot once a month. “That was a godsend,” Dianne Sellers said.

At one time, he lived in his grandfather’s old house and boarded up all the windows in his paranoia, causing a lot of property damage. He had to leave there after an arrest for breaking into a nearby house, owned by relatives, with another person. “Brad went to jail, and the other guy didn’t.” Dianne Sellers said. “He’s always been a follower, not a leader.”

At the time of his 2021 arrest, Brad Sellers was living rent-free in an apartment complex owned by his parents. He had a roommate who was responsible for making sure he took his medication, but somewhere “that went to the wayside,” his mother said.

He became increasingly paranoid, said his father, George Sellers. The day of his arrest, his parents were alerted that he had locked himself in his bedroom and was threatening suicide. They called Weems Mental Health Center for someone to meet them at the apartment and went to the room. When his father attempted to open the door, Brad Sellers slid a knife up through the door opening and sliced his father’s arm so severely he needed medical attention.

Dianne Sellers took him to the emergency room and left him there, returning to the apartment. When she arrived, Quitman police officers were on the scene.

According to a report on WTOK, Sellers was still in the bedroom when Quitman police arrived. Clarke County Sheriff Todd Kemp happened to be near the complex and heard the Quitman Police Department calling over the radio for backup.  He was in the apartment when Sellers attacked Officer Thereasa Haire.

Kemp said Haire ran out fromf the apartment to a Paratech Ambulance that was outside on standby. Kemp and Deputy Bill Howell then went after Sellers.

“Officer Howell kicked the door in and deployed his Taser. We were on top of him in a matter of seconds and were able to take him into custody without any further incident,” Kemp said.

“Just a sad situation how it all turned out,” Kemp said. “I felt like if I had gotten there first, it wouldn’t have happened like that.”

Dianne Sellers said, “There were a lot of people there, which I felt was unnecessary. I knew we were not handling it right.”

She said the Clarke County Sheriff’s Department has two crisis intervention team officers whom her son was familiar with, but neither was available when she called their cell numbers. CIT officers receive training to handle mental health crises.

Asked if he had CIT officers on the scene, Quitman Police Chief Mike McCarra said, “My officers have all kinds of training.”

George Sellers said his son knows Kemp and seemed to trust him. “The sheriff had almost talked him out of that room, but when he saw someone he didn’t know behind him, that was the end of that,” he said.

Usually a defense attorney for a suspect charged with a crime raises competency issues, said Matt Steffey, a law professor at Mississippi College School of Law. But prosecutors and judges also can.

A person can also be found incompetent because of drug abuse, Steffey said.

Kemp said Brad Sellers had substance abuse issues for most of his adult life.

Most competency issues are raised pre-trial, which often leads to cases like those of Brad Sellers and Raffell Franklin, where a person considered a danger to him or herself or others can be held awaiting commitment, Steffey said.

Many times, individuals with competency issues are granted the opportunity to make bail, Steffey said. “A person whose mental competency is in question has just as much right to bail unless and until the state makes a presentation that the person is a danger to themselves or others. Well, envision the alternative,” Steffey said.

Often the question is: Can competency be restored?

Often an individual is treated for three to six months to see if they can be competent. Kemp said jail personnel are giving Brad Sellers is receiving treatment at his jail. He takes risperidone, an antipychotic, and trazodone, which treats depression.

“Often the person languishes in jail with the explicit or implicit consent of the defense lawyer,” Steffey said.

Also at issue is if the defendant could tell right from wrong at the time of the crime — in other words, was Brad Sellers mentally healthy enough to know his actions were criminal? “It’s a tough sell to a jury,” Steffey said.

Dianne Sellers said she understood wait times could be lengthy for those awaiting commitment because of the demand for beds and services. “To me, it’s sort of urgent,” she said. “They need more mental health personnel to handle the backlogs of work that needs to be done.”

She said she does not believe she and her husband can continue caring for Brad themselves. “He needs a facility that can handle him,” she said.

This story was produced by the Mississippi Center for Investigative Reporting, a nonprofit news organization that seeks to inform, educate and empower Mississippians in their communities through the use of investigative journalism. Sign up for our newsletter.