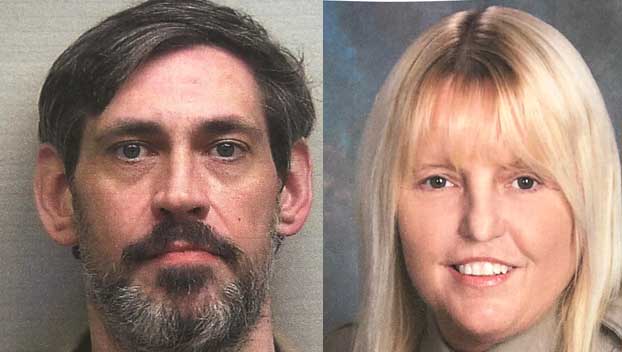 The getaway vehicle used by a man wanted for murder in Alabama and the jail official suspected of helping him escape after a “jailhouse romance” was found in an impound lot in Tennessee, where it sat for nearly a week before authorities realized they had it, officials said Friday.

Sheriff Rick Singleton of Lauderdale County, Alabama, told a news conference the Ford Edge with distinctive burnt orange paint was found on a roadside and towed the same day that Casey White, charged with murder, and former assistant corrections director Vicky White disappeared. The vehicle was found in a rural area off Interstate 65 about 100 miles (about 160 kilometers) from the jail in Florence, Alabama.

Authorities in Williamson County, Tennessee, realized they had the vehicle Thursday night, which was hours after U.S. Attorney General Merrick Garland said the two, who aren’t related, are “regarded as extremely dangerous,” and the U.S. Marshals Service has taken over leading the search.

Officials have said they hoped Casey White’s size — 6-foot-9 and 340 pounds — would help lead to his capture since it’s hard for him to be inconspicuous. He also has identifiable white supremacist tattoos. He and Vicky White appeared to have had a “jailhouse romance” before his escape, Singleton said.

“They found the car before we even knew they were gone,” said Singleton. Some of Vicky White’s belongings were found in the vehicle, which someone had attempted to spray paint, he said.

The tow truck driver who hauled the vehicle to a lot likely saw news coverage about the escape and notified police in Tennessee, Singleton said.

“There’s no fault or blame on anyone,” he said.

The Williamson County Sheriff’s Office said the vehicle had been found in Bethesda and there was no indication the two remained in the area.

A nationwide manhunt has been ongoing since the pair disappeared April 29. Casey White was awaiting trial in a capital murder case and Vicky White was assistant director of corrections for Lauderdale County. She appears to have helped him plan and execute the escape, Singleton said.

Authorities are now trying to determine whether any vehicles had been reported missing in the area where the car was found, he said.

“We’re sort of back to square one with a vehicle description,” said Singleton, adding at one point: “We’re behind where we’d like to be.”

The two likely had mechanical problems with the car and left it where it was found in a remote area, said Singleton. The sheriff said he was worried for the safety of his former employee because Casey White is “volatile” and could turn on her at any time.

No weapons were found in the car, indicating that the two are still armed, said Singleton. “My gut is telling me they are obviously on the run,” he said.

On the day the pair disappeared, Vicky White, 56, told her coworkers that the 38-year-old inmate needed to go to the courthouse for a mental health evaluation. She was escorting the inmate alone — a violation of the sheriff’s office policy. When she did not answer her phone or return in the afternoon, authorities realized the pair had gone missing. Authorities eventually learned that the evaluation was never scheduled and was just a charade to allow Vicky White to sneak Casey White out of the jail without suspicion.

The two left in a patrol car, which was found abandoned nearby in a parking lot where investigators believe Vicky White had parked a getaway car.

In the past week, authorities have learned that Vicky White purchased an array of weapons, including an AR-15 rifle in January and a shotgun two weeks before the escape. They also believe she has a 9 mm handgun with her and have received reports she may also have a .45 caliber handgun, a federal marshal said.

Federal investigators believe they had been planning the escape for at least several months. The Marshals Service and the sheriff’s office have interviewed a slew of associates, family members and others who knew both Casey White and Vicky White and have received numerous tips in the investigation. But despite their best efforts, investigators have not come up with any solid leads to locate them.

“Both Casey White and Vicky White pose a major threat to the public, and they must be apprehended,” she said in a statement.

Casey White was being held at the jail on capital murder charges in the 2015 death of Connie Ridgeway. He confessed to the slaying in 2020 while in state prison for other crimes. He’s been linked to home invasions, car jackings and was also involved in a police chase, Keely said.