Fact vs. Fiction: Depictions of what happened to freed people at Devil’s Punchbowl are ‘concocted Confederate propaganda,’ Mississippi man say 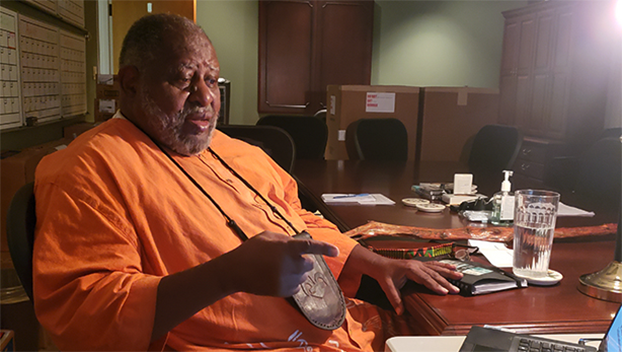 A flyer on the website of the Elmer “Geronimo” Pratt Gun Club of Central Texas advertises an event in Natchez on June 19 as the “Gathering of the Great Armies: 20,000 Strong Armed 2nd Amendment Rally Juneteenth Black Holocaust Remembrance.”

At 10 a.m., the group plans to meet at the Natchez National Cemetery, 41 Cemetery Road for “a historical account” of what took place at what they are calling the Devil’s Punchbowl, “the location of the largest known Black concentration camp where over 20,000 newly freed slaves were killed by Union soldiers.”

The problem is Ser Boxley said it didn’t happen that way. He said the myth about the Union soldiers putting newly freed enslaved people in a concentration camp at the Devil’s Punch bowl and killing 20,000 of them is fiction.

At the center of the debate is what happened to the thousands of newly freed people who died during the Civil War in the encampment known as the Devil’s Punchbowl under the bluff in Natchez. Some history reports that up to 20,000 people died due to the conditions in the camp.

Boxley questions narratives that blame the Union army for those deaths.

“What I’ve been saying for years is this is concocted Confederate propaganda,” Boxley said Thursday morning.

“There is a fervor, and anti-Union army sentiment that still exists here, going back to the day when the Union army arrived in Natchez — July 13, 1863,” he said.

The myth of the Devil’s Punchbowl mixes fact and fiction.

“Let’s look at the facts. The United States Army established two refugee camps below the bluff. One was located near the Devil’s Punchbowl, but not in it. The other was also located below the bluff, but was further south,” he said. “The Union army was segregated, but the Navy was not.”

The barracks of the U.S. Colored Troops were located below the bluff in the area of Magnolia Vale. The white Union troop barracks were located at Fort McPherson above the bluff, Boxley said.

“On July 4, 1863, Vicksburg fell to the Union. Five days later, July 9, Confederates surrendered to the Union Army at Port Hudson. Up and down the river, enslaved people — I call them enslaved people who self-emancipated, otherwise known as runaway slaves — flocked to where the Union army was. They were seeking freedom behind Union lines.

“That meant thousands of former slaves flocked to Vicksburg, Natchez, Port Hudson, all along the Mississippi where the Union occupied.”

The Union army had no policy at the time for how to deal with the thousands of formerly enslaved people who were arriving in droves.

“Natchez had a huge influx of self-emancipated enslaved persons and the Union was not equipped to handle that, so they established refugee camps,” Boxley said.

In addition to the two refugee camps established below the bluff, another was established at the Forks of the Road site and across the river in Vidalia.

The people in the contraband camps suffered disease because of the overcrowding and poor sanitation, as well as from drinking Mississippi River water.

“Under the conditions, they had mass deaths – daily deaths,” Boxley said. “If you look at the diary of the Bishop of the Natchez Diocese at the time, he talks about the conditions and the death there. Other reports that you get are from union officers who were sent down into the camps to inspect what was going on in the Union army along the river, to find out how many were in the camp and how many died.

“The important thing is, these are facts. We are looking at this from a rational standpoint. A few whites died: white union troops, colored troops and so did the civilians — women, children, elders and the soldiers’ wives and sister and mothers and children, sons and daughters in the freedom camps,” Boxley said.

The Natchez National Cemetery was established in 1866, Boxley said, and bodies of Union soldiers were disinterred from below the bluffs and reburied in the national cemetery, including U.S. Colored Troops.

“Hundreds of them are unknown. However, 70 or 80 of them are known and you can see their burial records,” he said. “None of this has to do with the Devil’s Punchbowl.”

Boxley said he told all of this to the Juneteenth “front men” who came to Natchez several weeks ago to do site visits.

“I am not going to defend the issue of the Devil’s Punchbowl propaganda. What I will do is tear it apart. What I will do is go and say, ‘Let’s go to the Devil’s Punchbowl propaganda and say what date did it happen? Can you put a date on it? Where is there evidence of this?’ That’s where critical thinking comes in. If the Union army became the freedom liberation source for runaway and enslaved and thousands of free persons, who became union soldiers and sailors, where were they as veterans? Natchez, by 1865-66, was still under the control of the Union army. Natchez was well on its way to reconstruction. We had Black elected officials, Blacks on the Board of Aldermen. That’s why I am talking about critical thinking,” he said.

What happened to the bodies?

The part of the story that is untold and still in question, Boxley said, is what happened to the bodies of the civilians who died in the contraband camps below the bluff.

“That’s the most important thing or part of this story to me. Where are the bodies? What happened to them?” he asked.

He said the Historic Natchez Foundation, the Natchez National Park Service, Visit Natchez and other tourism groups should lead the way to answering the question of what happened to the civilians who died.

“I plan to petition through Congressman Bennie Thompson’s office to ask for these agencies to at least put up a historical marker that points out the facts. I’m calling out the agencies here — the historical agency, tourism agency, the political leaders, the state, the VA, the Corps of Engineers, the Mississippi River Commission. They should put together a factual public story and history. It must be done to answer what happened to the former slaves and citizens who died. Where are our ancestors? I’ve always been adamant about that,” Boxley said.