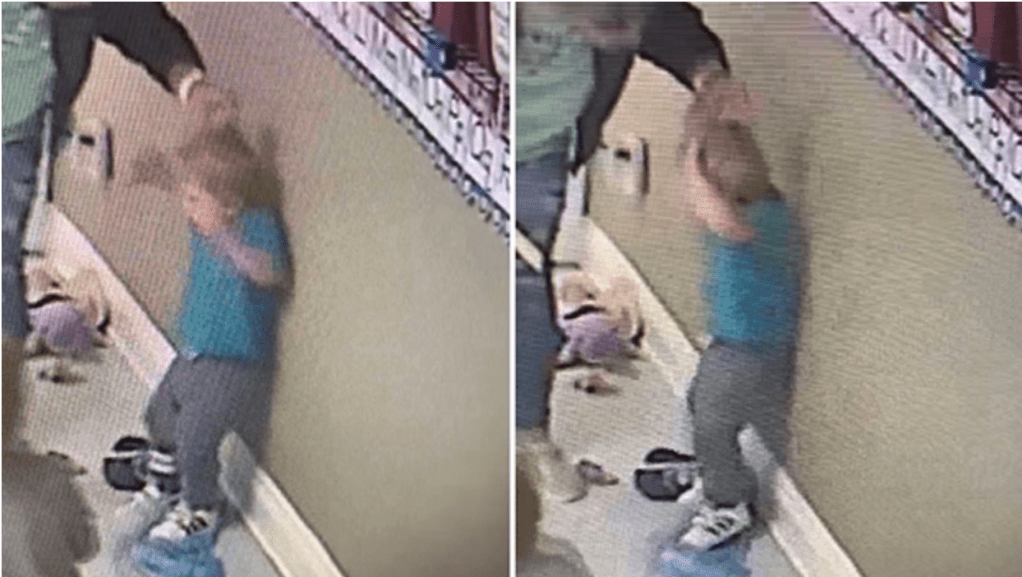 George Pirkey submitted these still images from a surveillance video of his son Grayson as he appears to be held by the hair by an adult daycare worker.

Anabelle Wilson said she sat in the gallery of a packed courtroom on Wednesday and watched as the women charged with abusing her child entered guilty pleas.

“It’s hard, sitting in the gallery looking at those women,” she said. “They didn’t even fake a tear.”

Three of the four women charged in an investigation of the Noah’s Ark Christian Childcare in Vidalia, just across the river from Natchez, Mississippi, pleaded guilty to child cruelty charges during a pre-trial hearing on Wednesday in Seventh Judicial District Circuit Court.

The investigation into the abuse began in October 2021. On Friday, Wilson said she, like many, is waiting for all of this to be over.

“It’s one step closer to closure,” she said. “I hope we can begin to heal once we get to the sentencing. That was really hard to get past – the lack of remorse that I saw. I was hoping to see one ounce of humility in them but I didn’t.”

Judge Kathy Johnson ordered a pre-sentencing investigation and all four women are scheduled for sentencing on Sept. 7 at 1:30 p.m. Before that, Johnson will review the evidence against them, including 82 clips of video footage from the daycare seized by investigators.

That’s not including physical evidence such as photos of bruising and marks on the children, Wilson said.

“Some of this evidence is coming up, I guess because now we know it won’t go to a trial,” she said. “It’s baffling to people, the magnitude of the abuse. It has wounded the majority of our community. We’re hoping for jail time and felony charges.”

Wilson’s son, Ty, who will be two in August, was one of the victims.

Wilson said her son was 14 months old when she got a phone call from the daycare director stating that her son had been hurt and that the director was on her way to fire one of the employees. Wilson said she immediately called law enforcement and went to the daycare to check on Ty.

“I still struggle to wrap my mind around it,” she said. “We wonder what he (Ty) would be like today if he hadn’t suffered months of abuse. You wonder what you’ve lost and what you can restore.”

Wilson and other families have since taken civil action against the Department of Education; the daycare; Atlantic Casualty Insurance Company, which is the insurance agency representing the daycare, and each of the four workers.

George and Paige Pirkey, the parents of two-year-old Grayson, said their son started going to the daycare as a newborn. George said Grayson had older siblings enrolled at Noah’s Ark as well, while the daycare was under the same ownership.

“Just prior to the initial report, we did notice a few behavioral changes,” George said. “We often questioned certain marks and bruises that he came home with. There were times when we picked him up from daycare that he would be unusually thirsty and hungry. We thought it was a phase.”

Since the daycare closed amid the child cruelty probe in October 2021, George said, “There are things that we keep an eye on.”

Paige added, “I was in disbelief after viewing some of the footage. I had to walk away after the second video because it was too upsetting to watch. It appeared that every staff member had a paint stick to discipline the children with. As a parent, you put your trust in daycare to care for your babies. I pray that the justice system will be the voice of these babies who were innocent and helpless at the hands of these women.”

The couple expressed relief at the pleas the daycare workers made this week.

“It has had its ups and downs but we are ready to see this put behind us and move on from it,” George said. “My wife and I are very thankful to Sheriff David Hedrick and Concordia Parish Sheriff’s Office investigators, the Louisiana State Police and the Concordia Parish District Attorney’s office for their hard work and dedication.”

He added the lines of communication about what happens with the case have been open.

“Now that all four (pleaded guilty), the next step is the sentencing. The judge will be the voice for all of the children who suffered physical, mental and emotional abuse at the hands of these four women. After viewing all of the video footage, it’s clear that every child there suffered abuse, right in front of all of the other children.”

Wilson organized a private support group for the families involved called “Veritas Aequitas,” the Latin words for “truth” and “justice.”

Its purpose is to provide updates and advocacy for the victims’ families, Wilson said.

There were 40 to 50 children involved, including after-school children, George said.

Grayson now has a private sitter watching him when the Pirkeys work.

“It hasn’t been easy but there are great, trustworthy daycares in our community,” George said of trusting other people with their children. “As a parent, you can’t help but keep in the back of your mind what happened. You can’t forget about what your child has been through at one point in time.”

Wilson said her son is “in a great environment now” and is thriving under different care.

“I don’t think I will ever fully trust anyone with my children again. My trust is broken beyond repair. But I want him to know there are safe and healthy childcare centers because he can’t be with me every single day. I have to work.”