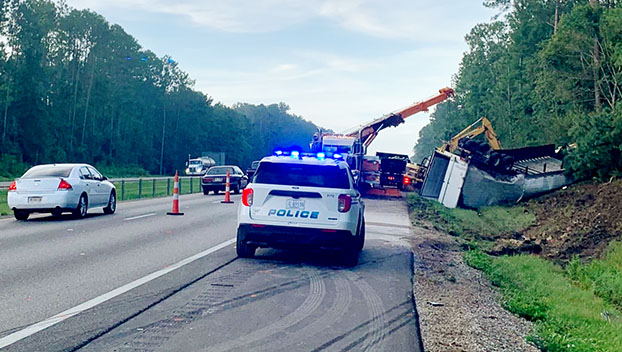 The southbound right lane side of I-59 was closed while the scene was being cleared Monday morning.

The driver of an 18-wheeler died Sunday after he became involved in a multi-vehicle accident on Interstate 59 in Hattiesburg.

Just after 11 p.m.on Sunday, Aug. 7, emergency personnel responded to a multi-vehicle accident on I-59, in the southbound lanes, near the 63-mile marker, south of Hardy Street in Hattiesburg.

A Honda Accord traveling southbound struck an abandoned Toyota 4Runner on the side of the interstate, which then caused an 18-wheeler also to wreck and go off into the trees, and catch fire.

The driver of the 18-wheeler was deceased at the scene, and one individual from the Honda was transported to a local hospital for injuries.

Crews were busy working the scene and clearing it from debris Monday morning.